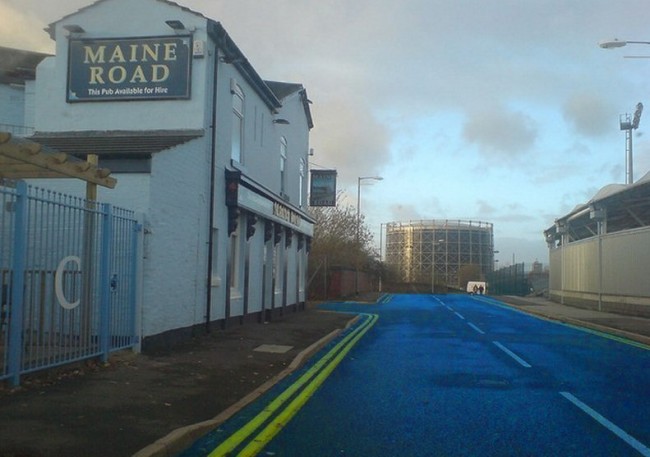 Manchester City Council have announced that the city is to commemorate Manchester City’s (are you still following?) first title win for 44 years by quite literally painting the town blue.

The plan is to turn the streets of Moss Side blue by laying coloured tarmac. The road in question has already been renamed ‘Blue Moon Way’ after a competition for the residents, and flanks a new housing development on the site of City’s old Maine Road ground – a complex which will ultimately see over 300 swanky new houses and apartments opened.

Prospect GB Limited contracts manager Wayne Hale – a City fan himself – had this to say:

“I’ve been a Blue since I was a boy and standing on Blue Moon Way brings back cherished memories for me – I can see the alleyways I used to cut through to Maine Road.

“This blue-coloured road is a way of marking the heritage of the area and recognising that the Maine Road stadium will never be forgotten. A lot of people come here and feel nostalgic about the as they remember the old days. I think the blue road will become a tourist attraction in its own right – especially after winning the title.”

Blue tarmac aside, the best part of the whole shebang?

Pies would hereby like to get in early and put down a deposit on a little house on Shaun Goater Lane.