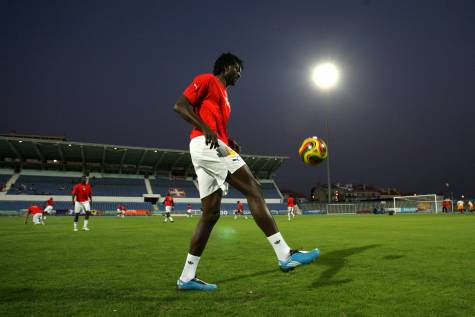 The rangy forward has won 38 caps for his country – scoring 16 goals – but has admitted that the fatal attack on the Togolese team bus he witnessed at this year’s African Cup of Nations has made it impossible for him to represent his country again.

“Following the tragic events during January’s African Cup of Nations, in which two of my fellow countrymen were killed by terrorists in Angola, I have made the very difficult decision to retire from international football.

I have weighed up my feelings in the weeks and months since the attack, and I am still haunted by the events which I witnessed on that horrible afternoon on the Togo team bus. We were just footballers going to play a football match and represent out country, yet we were attacked by people who wanted to kill us all.

It is a moment I will never forget and one I never want to experience again.

For nine years I have played for the Togo team and, despite the events in Angola, I have some very good memories of my international career.

The striker then goes on to wish his fellow countrymen the very best for the future;

I feel very proud to have been trusted with the position of captain of the Togolese football team. Leading your country in international competition is the ultimate honour for any player.

Togo have some very talented players, and I dearly hope the players who remain will be able to put their memories of Angola behind them and go onto be a success for the nation. I have enormous belief in each and every one of them, players, coaches, staff and their families.

The people who were on that coach together will forever be joined by a special bond – we are all brothers. I will always have the team and the people of Togo close to my heart and wish them every success in the challenges that they will face in the future.”

Pretty moving stuff there I think you’ll agree. The only thing surprising about this news is the length of time it took for Adebayor to come to a decision, and I’m pretty sure you can expect to see more of the Togolese team to follow suit over the coming weeks.