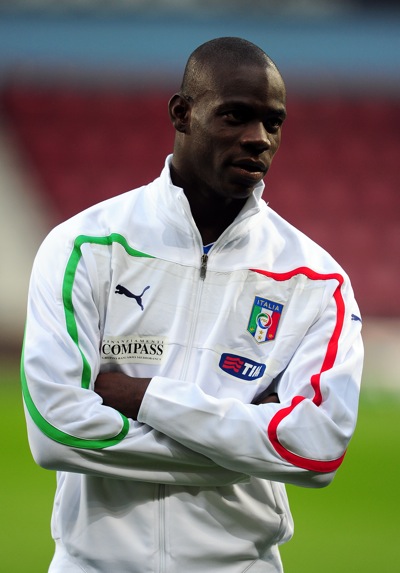 Mario Balotelli was the victim of more racist abuse by Italian ‘fans’, during Italy’s 1-1 draw in a friendly with Romania last night.

The Man City striker was repeatedly booed by a small group of right-wing idiots.

And a banner bearing the message “No to a multi-ethnic national team” was also confiscated at Klagenfurt’s HypoArena stadium. After the match, Balotelli told the Italian media:

“If I have to hear those chants every time, you can’t go forward like that.

“I leave others to do the judgement. I am happy to be in the national team.

“It wouldn’t be right to stop a game because a few fans that turn up to the stadium behave like that.

“We need to change these people but it’s not me that has to do it… A multi-ethnic Italy already exists and we can do better.”

This isn’t the first time Super Mario has had to put up with blatant racism from his fellow countryman (Balotelli was born in Palermo and furthermore has never even set foot in Africa). Whilst playing for Inter last season, Balotelli was subjected to racist abuse by a section of Juventus fans.

It’s important that these morons are weeded out and hit with lifetime bans from all football grounds. Zero tolerance is the only way to deal with racism.