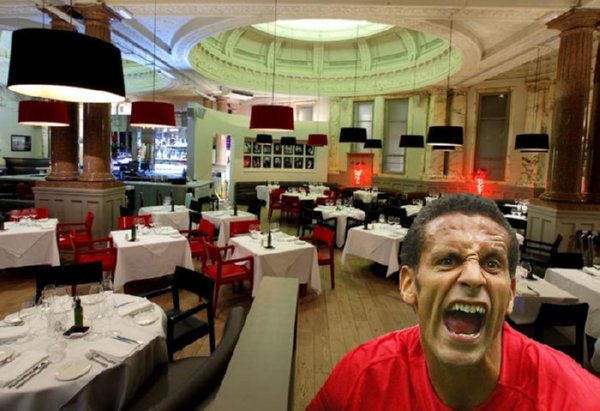 According to several of this morning’s newsrags, a 55-year old junior chef has been cautioned and 29 bags of cannabis have been seized from a locker at Rio Ferdinand’s ‘Rosso’ restaurant (the sordid den of inequity where Wayne Rooney reportedly solicited the services of one ‘Juicy’ Jenni Thompson over a candlelit bowl of chicken nuggets) in Manchester following a Police #drugsraid at the Italian eatery on Friday afternoon.

Apparently police were tipped off after hearing rumours of Rosso’s increasingly fragrant risottos or some such nonsense.

“At 4.15pm on Friday 6th January 2012, police officers executed a search warrant at Rosso restaurant on Spring Gardens in Manchester city centre. As a result of the warrant, 29 snap bags of drugs believed to be cannabis were recovered from a locker in the staff area.

“As part of police inquiries, a 55-year-old man was arrested on suspicion of possession of class B drugs with intent to supply and has been cautioned.”

The chef is also, perhaps unsurprisingly, out of a job as far as Rosso are concerned. We can’t confirm or deny this, but we sincerely hope that the guilty party in question at least attempted the old ‘it’s just oregano officer, honest’ defence.

And that, people, is the news.