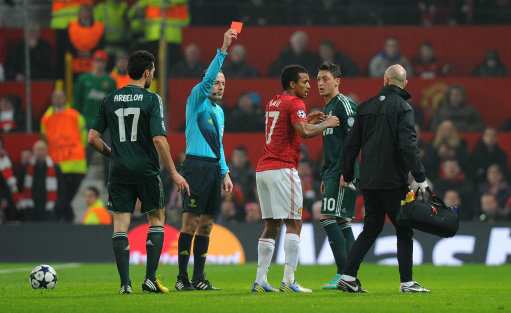 Nottinghamshire Police have actually been forced to remind people about the dangers of wasting police time after a smart-arsed Manchester United fan was so disgusted at Nani’s sending-off against Real Madrid last night that he rang 999 to report a crime last night, then told the emergency call handler that “United had been robbed”.

“While this recent example may be amusing, it illustrates the sort of insincere calls we have to deal with on a daily basis in the Control Room.

“They waste our time and they direct us away from genuine victims of crime, particularly if we dispatch officers out to something that turns out to be a bogus report.

“I would ask people to think before picking up the phone for emergency services. I would also advise parents to ensure your children are aware that prank calls and the reporting of made-up crimes is a crime in itself.

“There may be people out there in real trouble who need our help and they have to wait because we are tied up with calls like this one, reporting a referee from the television.”

The 18-year-old fan, who called from his home in Bingham, Nottinghamshire, has since apologised for his actions, claiming to have been “caught up in the excitement”.

The Police have decided not to pursue the matter further.