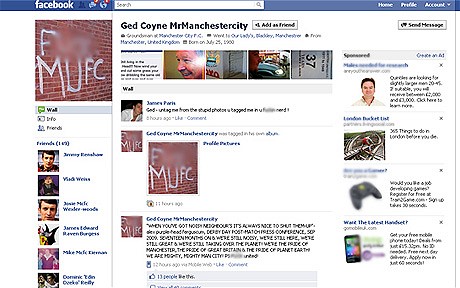 Manchester City’s groundsman of 15 years, one Ged Coyne, has been forced by the club to delete his ‘MrManchestercity’ Facebook account after posting a flurry of ‘offensive’ messages aimed squarely at rivals Manchester United.

“The member of staff in question regrets posting the material and removed it immediately.”

The account has been taken down amid fears that it could provoke ahead of tomorrow’s Manchester derby at Old Trafford or ‘the Theatre of Complete Tosspots’ as Coyne so eloquently described United’s stadium.

Coyne also claimed that David May’s now-cancelled ‘United Nights’ event was called off due to the fact that:

“Manchester is blue and City fans were not only gonna storm Walkabout [where the event was due to be held], but burn the sh*thole down.”