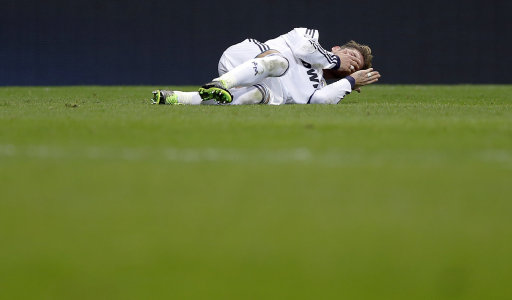 Having already scored, Sergio Ramos was booked twice in the space of 60 seconds (Jordan Ayew would be so proud!) to pick up the 17th red card of his entire career – the 11th of his Real Madrid career (a club record) – against Rayo Vallecano on Sunday, thus leaving him one single sending-off from equaling the all-time Spanish league record at the age of 26.

The man’s a machine.

Ramos was ejected in the 19th minute after picking up two of the softest bookings you’re ever likely to see, and after the match complained to AS that it’s now become far too easy for referees to send him off:

“I am hurt by the situation. It is not normal for me to be sent off within two minutes. I’m not one to come in with hard tackles or to do something evil. It’s easy to send off Sergio Ramos. It’s worrying.

“It hurts me to have left my team-mates disadvantaged and to have forced changes. Spanish football deserves the best referees because we have the biggest players.

“Referees are required to interpret situations. My first card was completely unfair. You cannot leave a team with 10 men for that.”

Softer than a pillow full of angel farts.

Yes, the writhing after the handball was a bit much and yes, he may be a bit of a scheister  all the bloody time but it certainly looks like his reputation preceded him against Vallecano. There’s simply no way that a player should be sent-off for the net sum of those two ‘offences’.