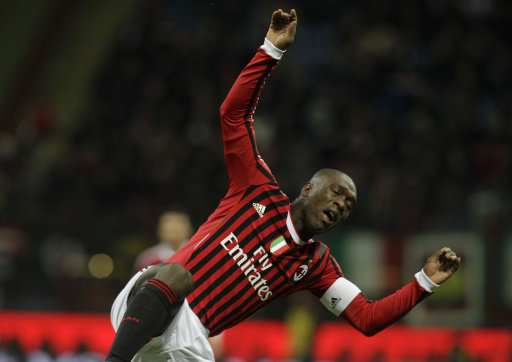 Clarence Seedorf has just announced that he is going into early retirement at a press conference on live TV in Brazil so that he can return to AC Milan as the ailing club’s new head coach.

Seedorf will be replacing Massimiliano Allegri at the helm, who was canned yesterday following Sunday’s embarrassing 4-3 defeat away against Sassuolo – the smallest club ever to have played in Serie A (indeed, they hail from a town with a smaller population that most Serie A ground capacities) – which left Milan 11th in the table, 30 points behind Juventus at the top and only six points above the drop zone.

The Dutch veteran was plying his trade in the Brazilian top flight with Botafogo and was still going incredibly strong at the age of 37 (must be those thighs!) but he has, this afternoon, confirmed that he is cutting his playing career short after activating a release clause in his contract to do so, telling the press: “I’ve decided to stop after 22 years. I’ll be the next coach of Milan.”

We sincerely wish him all the best at the Rossoneri. You just know he’s going to be a class act.

As a trivial aside, Seedorf also becomes Milan’s first ever black head coach/manager, and Serie A’s second after Napoli’s Jabras Faustinho Canè back in 1994.