After 19 years of faithful service split across two stints, 28th April, 1965 saw Stoke City lay on an extraordinary extravaganza of a farewell testimonial for the club’s most famous son, Sir Stanley Matthews, on his retirement.

As well as the 35,000 fans in attendance at the Victoria Ground, the stadium was chock full of Eurovision television cameras and radio services from around the world. All in all, it’s said some 112 million people tuned in to watch ‘The Wizard of Dribble’ weave his silken magic one final time. It truly was a momentous day.

Fittingly, the guest list was impeccable – though we’ll get to that in a moment.

The aforementioned Tottenham trio were among an entire constellation of footballing stars that turned out to wave Matthews off into the sunset, with one look at the phenomenal teams listed in the match programme showing in just how high a stead the Stoke City winger was held… 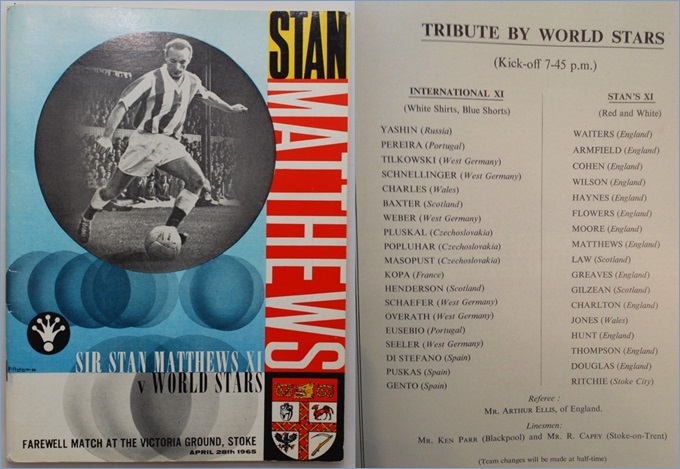 Here’s a closer look at that incredible team-sheet… 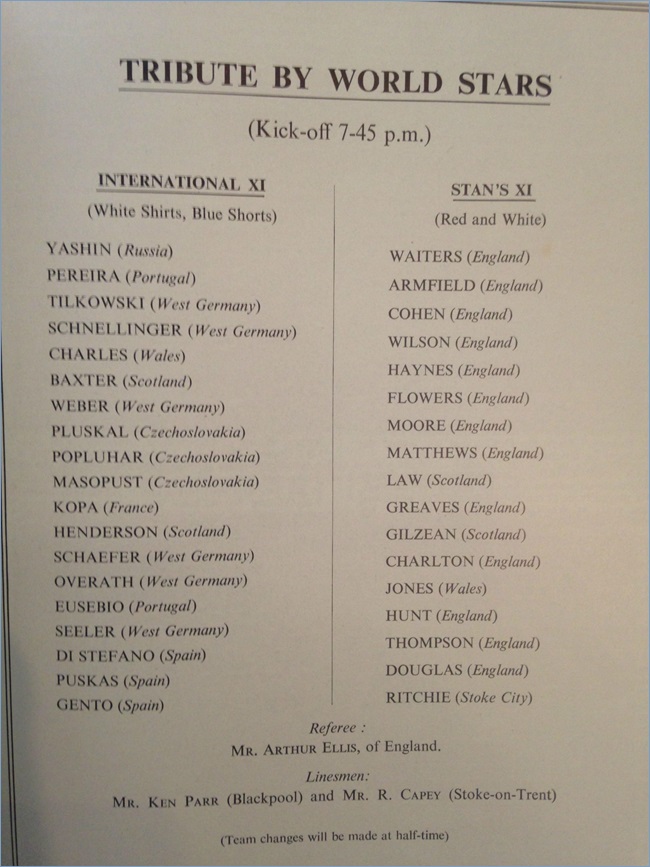 Astonishing. A who’s who of post-war football royalty.

For the record, Matthews’ XI lost out 6-4 to their international opponents on the day, not that it mattered a jot.

Yahin and Puskas carried the departing hero off on their shoulders as the 35,000 fans inside the Victoria Ground serenaded him from the pitch with a rousing chorus of ‘Auld Lang Syne’…

Of course, Matthews went on playing on a semi-competitive basis for years to come. Indeed, Matthews’ final competitive appearance came in 1985 when he turned out for an England Veterans’ XI against their Brazilian counterparts at the stately age of 70.

Matthews suffered knee cartilage damage during the game, later describing the injury as “a promising career cut tragically short” in his autobiography.

(A hearty thank-you goes to Pies fan Seb Rawle for sending us the images of the team-sheet. Much appreciated old bean!)