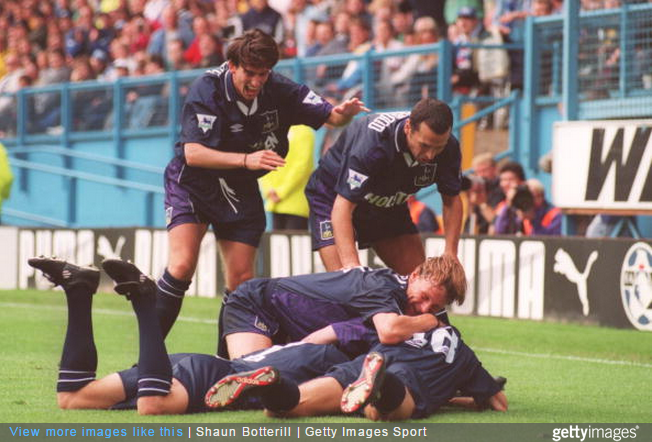 Signing World Cup superstar Jurgen Klinsmann was a massive coup for Tottenham chairman Alan Sugar in the summer of 1994.

The German striker was widely regarded as one of, if not the, best in the world and Sugar was determined to turn things around for the club after it had been hit with an unprecedented fine and points deduction for previous transfer irregularities.

Klinsmann’s debut came at Sheffield Wednesday on the opening day of the 1994/95 season – a frenetic game in which Klinsi lined up as one of manager Ossie Ardiles’s so-called ‘Famous Five’ attackers.

Teddy Sheringham and Darren Anderton fired Spurs into a two-goal lead, before Dan Petrescu and a Colin Calderwood own-goal evened things up.

Nicky Barmby made it 3-2 to the visitors 19 minutes before time, and then Klinsmann made his mark – quite literally…

With just nine minutes to go, the German hitman headed home an Anderton cross from close range. To celebrate, he ran to his teammates and led them in a mass swallow-dive onto the turf.

He was aware he was widely disliked in England, where fans regarded him as a terrible diver – but in an instant he defused all the carping, and for good measure exploded the myth about Germans having no sense of humour.

It was a witty riposte that set Jurgen up as the darling of the season. He went on to score 21 goals, linking up with Sheringham in one of the finest striking partnerships the club has ever seen.

He also went on to be named Player of the Year by the Football Writers Association, which doesn’t tend to just happen by accident.