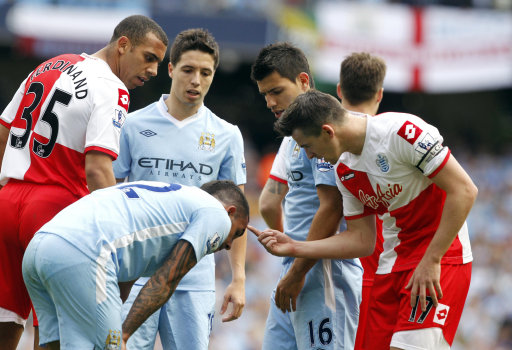 Silly old Joey Barton is currently staring down the barrel of a twelve – count ’em, twelve! – game ban for general dickery on the final game of last season and, with QPR’s patience reserves dwindling, it looks like English football’s preeminent copy-and-paste philosopher is going to be keeping the chub at bay by training with League Two side Fleetwood Town.

“Looking forward to training with Fleetwood for the week. Will get a much needed sweat on.

“Still have three years left at QPR. Exciting times for the club, which I intended to be a part of. Need to get some fitness in the meantime.

“Fleetwood are a young club going places. Five promotions already in the last few years. If I help some of their young players, great.

“Training with them will certainly help me with my short-term fitness and my plan on being as fit as possible during my 12-game ban.”

The official line is that Barton will only be training with the Cod Army for a few weeks, but there are whispers that he may actually sign on loan until January.

‘Why Fleetwood?’ we here you cry. Well, our first thought was that it may be part of his community service conditions, but no – the simple explanation seems to be that Fleetwood will rattle through 12 games far quicker (five/six weeks earlier) than QPR.

More specifically, Barton’s ban would run up until the arse end of November if he stayed at Loftus Road, though it could be over by as early as September 29th if he signs on with Fleetwood temporarily.

While we’re on the subject of Barton, he’s only gone and rigged himself up a brand-spanking new website, in which he tackles the thorny issues of the day, e.g, The Royal Family, monosyllabic celebrity culture, ‘Fat Tax’, Draconian libel reform and the correct etiquette for extinguishing one’s cigar.