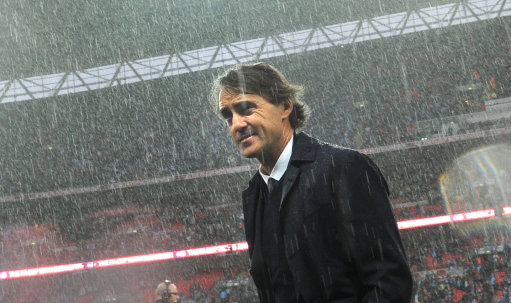 We appreciate that you’ve probably already heard by now unless you spent last night sleeping in a skip, but after a season of runner-uppery, Man City sacked Roberto Mancini after three-and-a-half years in charge at The Etihad.

In fact, Mancini was canned exactly a one year to the very day after winning the Premier League in the final second of last season. Quite the anniversary.

Anyway, Bob’s sacking came as little surprise to anybody, with the seeds of doubt being sown a week or so ago as rumblings about clandestine meetings with Manuel Pellegrini began emanating from Spain. Mancini looked and sounded like a beaten man when he had a jibe at the club’s hierarchy after the FA Cup Final for not nipping speculation over his job prospects in the bud and letting the speculation carry on unabashed.

As City manager, it always felt like Mancini was holding something back all the time. Not that all Italians have a pathological catenaccio fetish, but it seemed like Mancini had all the tools at his disposal to transform City into the best side to watch in the Premier League, yet still the likes of Silva, Yaya, Tevez and Aguero appeared to be just that bit hemmed in by their coach’s cautious, “solid foundations-centric” nature. With those kinds of flair players available, City should be a fizzing, carefree, effervescent bundle of energy steamrollering through their opposition. Instead they’re just a bit drab most of the time.

Several names are being mooted as Mancini’s successor, but the smart money is on Pellegrini as, as per with these things, there’s never that amount of smoke without fire. Pellegrini built his reputation by extolling the virtues of methodical, flexible offense with his Spanish sides – it could just be the sea change City need to turn their luxury liner around.

Any thoughts Pies fans? Is Pellegrini the man you want to see take over at City, or is there someone else you reckon is perfect for the job?

What about Bobby? He’ll be widely sought after. Where will he end up? Surely it’s nailed-on that he’ll have taken over at newly-promoted and vastly wealthy Monaco come August (with Gael Clichy his first signing)?