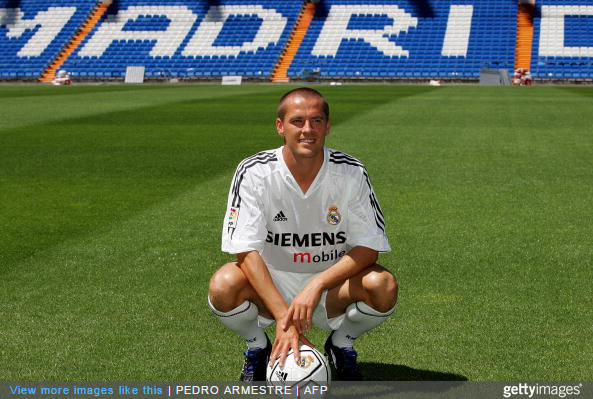 There’s always a special place in the heart of most football fans for the local(ish) lad done good, and that’s exactly the stead in which Chester-born Michael Owen was held at Liverpool during the early knockings of his senior career.

Having been on the Reds’ books since the age of 11, Owen enjoyed the dual adoration of being both a goal-laden teenage sensation and, as far as the Liverpool fans were concerned, ‘one of their own’.

Sadly, after a glut of largely cup-based silverware and a European Player of the Year nod, the prolonged honeymoon period all came to an end on 13th August 2004, when Michael Owen – aged 24 at the time – upped sticks, answered the Galactico call and joined Real Madrid.

He later revealed he had never wanted to leave Anfield, but Liverpool had allowed his contract to run down to just a year and Real were still willing to pay £8million to take the England striker off their hands.

That said, Owen also confessed to being suckered in by the lure of playing for a Real team that also included Zinedine Zidane, David Beckham, Roberto Carlos, Raul, Luis Figo and Ronaldo. He’s only human after all.

Owen was given the No.11 shirt once worn by the great Alfredo Di Stefano (in fact, it was Di Stefano that presented Owen with his new shirt at the Bernabeu on the day he signed). The future looked bright and everything in the garden was rosy.

However, it didn’t quite work out. Owen never managed to settle in Spain and his inconsistent form on the pitch drew criticism from the fans and the press.

He ended up scoring 18 goals in 41 games – not a bad return by anybody’s measuring stick – but the bar is set high at Real Madrid. The following season the club brought in Robinho and Júlio Baptista, and Owen was flogged on to Newcastle for £16.8million.

His career continued on a downward trajectory into a middle-aged pit of dull knitwear and horse racing from that point onwards.

Ironically, Owen’s single year abroad at Real coincided with the season in which Liverpool won the Champions League.

Fate can be a cruel bitch sometimes.