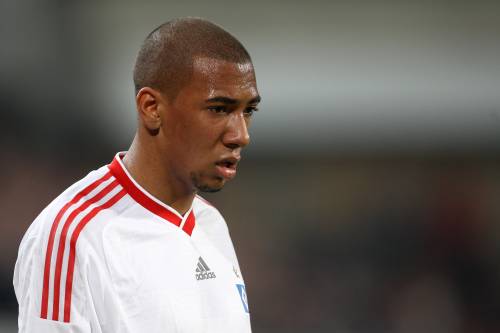 German international centre-back Jerome Boateng has confirmed that he is set to become a Manchester City player within the next few days, by completing a €12.5 million move from Bundesliga side Hamburger SV before the World Cup gets underway next week.

“I am going to sign on (for City) before leaving for the World Cup and the deal will be completed, it has been decided that I am moving there.

[Manchester City manager Roberto Mancini] came with two representatives to Hamburg and we chatted for one or two hours. He convinced me to make the transfer.

He believes that I will definitely need a few months to get settled in once in England, but that he sees so much potential in me that he will improve me.

Even if many people say that I am going to struggle to make the breakthrough, I am confident that I will. I am not afraid of anybody.”

The 21-year-old defender also revealed that life for the Boateng family in Germany has become extremely tense after his brother, Portsmouth’s Kevin-Prince, inflicted the injury on Michael Ballack that ruled the Chelsea midfielder out of the World Cup;

“It disturbs me the way our family name is being dragged around in public and my family is not being left in peace, it is not on that my older brother suddenly has cameras on his doorstep and he is being forced to stay indoors. This has overstepped the mark. It has been ridiculous.”

Boateng, who is currently away on international duty, even phoned the police from the German squad’s training camp in Sicilia to request that photographers and reporters were removed from outside his family home – but was told that nothing could be done;

“They said I have just got to live with that, being a Boateng. That has gone too far. That is not on.

What is the world coming to when my family cannot go out for a coffee or my brother cannot play with his children in the garden peacefully?”

It’s going to sh*t Jerome, that’s what it is.