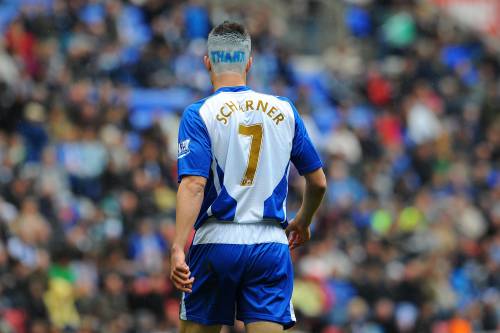 Former Wigan utility man Paul Scharner is set to hold talks over a possible free-transfer move to Liverpool during the next few days, after his contract with the Latics expired at the beginning of the month.

Newly- appointed Reds boss Roy Hodgson is a known admirer of Scharner, and tried to sign the versatile 30-year-old midfielder on at least three separate occasions whilst still in charge at Fulham – a fact that isn’t lost on his agent Valentin Hobel;

“Roy Hodgson and Paul Scharner – this is a special relationship, Hodgson thinks that Paul’s strengths in midfield are better than his attributes in central defence.”

However, Hobel also added that nothing is set in stone yet, as the Austrian has a few other irons in the fire;

“Liverpool would be a dream, of course, but we are in contact with several clubs. Because he is a free transfer, he can choose.”

Hmmm. Javier Macherano out and Paul Scharner in. Not exactly what you’d call progress is it?