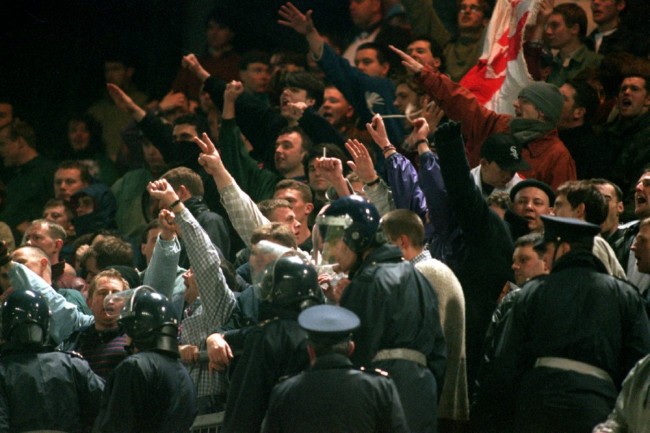 England’s post-season friendly against the Republic of Ireland at Wembley tomorrow evening is a fixture that resonates deep in the pits of many people’s stomachs due to the disgusting scenes that descended upon Lansdowne Road in Dublin the last time the two sides met – for a much-anticipated “friendly” –  back on 15th February, 1995.

Before the ball was even placed on the centre spot for kick-off the two national anthems were booed by either set of fans, with England’s hooligan contingent chanting “Sieg heil”, “No surrender to the IRA” and other such meathead classics as Irish national anthem “Amhran na bhFiann” was played over the loudspeakers.

The problems stemmed from a fairly high quota of the 4,500 traveling England fans in attendance being made up of despicable individuals with links to “Combat 18”, a neo-Nazi, white-supremacist and anti-Irish organisation who had little interest in the football and were hell-bent on offending and injuring as many Irish people as they could that night.

The Republic of Ireland (managed by Jack Charlton, who was heckled as a “Judas” all night) actually went 1-0 up at one point through English-born David Kelly but the game didn’t make it to half-time before being abandoned  – after 27 minutes as it happens – as English thugs in the upper tier of the West Stand began uprooting chairs and fencing and hurling the debris down onto the Irish fans in the lower tier.

Eventually the Irish supporters (of whom not all were totally innocent, it must be said) were evacuated from the stadium before the riot gear-clad Gardai entered to round up the English hoodlums, give them a good clubbing and escort them back across the Irish Sea having [sarcasm]done their nation proud once again[/sarcasm].

Here’s an Irish news report with footage of the rioting…

If you wish to read on, The Score have a fantastic oral history of the Lansdowne Road riots, as recounted by the players, managers, journalists, photographers and pundits present on that infamous night.

Take it from us, it’s well worth a shufty.