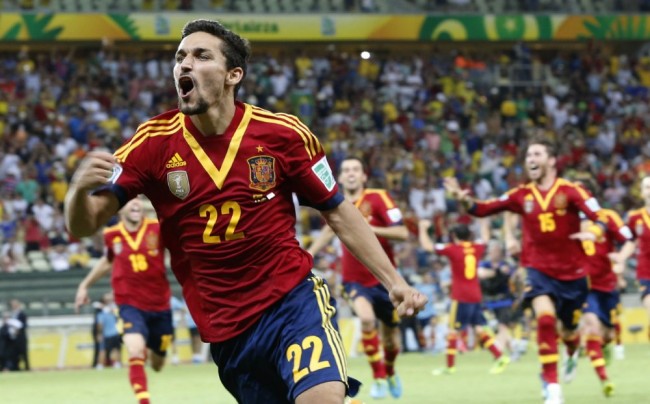 What would Jesus do?

After the gritty hustle, bustle, diving, whining and cheating of Brazil-Uruguay in Belo Horizonte on Wednesday evening, the watching world settled down the following night expecting a refined slice of classy, continental football and, although we weren’t treated to any goals, we were treated to a fascinating game full of poise, skill and tactical precision. Perhaps it’s a bit of a misnomer to the Layman, but the second Confederations Cup semi-final may well go down as one of the most engrossing goalless 120+ minutes of football ever played out.

Prior to the game many pundits, including Pies, had already spirited Spain through to the final, though considering Italy’s recent respectable results against La Roja, writing off the Azzuri so readily was perhaps a tad unfair. That said, with a couple of key injuries dotted around the squad (especially to their attacking focal point, Mario Balotelli) it didn’t look like the Italians were going to be best equipped to fight their corner.

Having taken stock of his lot, Cesare Prandelli opted for a defence-centric approach to his game of chess with the stoic Vincente Del Bosque, lining up with a deep-set back five to minimise the space Spain’s fleeting forwards could operate while still being poised to capitalise using pacey, direct counter-attacks. 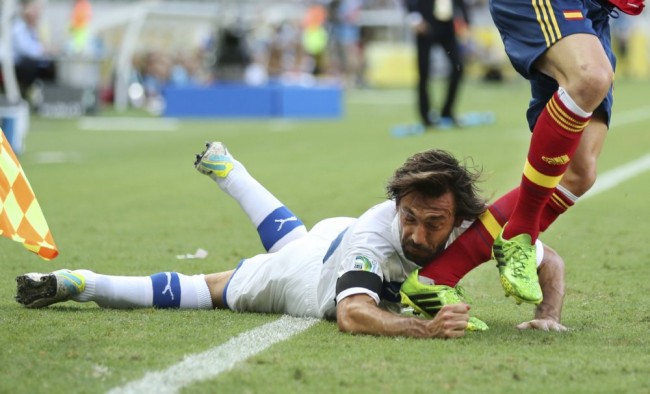 Perhaps it was the high humidity in Fortaleza or the fact the entire crowd were rooting for them as default underdogs against the all-conquering Spaniards, but for the first 20/30 minutes Italy were by far the better team – moving the ball around fluidly and nullifying their opponents. In fact, to the uninitiated it would have been perfectly reasonable to assume that the team in blanco were the World and European champions. Spain just couldn’t tick over.

Every time a Spanish player had the ball at their feet, a swarm of white shirts would surround the man in possession and harangue dutifully. Football hipsters everywhere were wilting at the sight of long balls from deep (oo-er!) easily and repeatedly penetrating the Spanish defence. Tony Pulis, sitting at home in his tracksuit and baseball cap, must have been loving the lack of finesse on display.

Early chances came the way of Emanuele Giaccherini, Christian Maggio, Daniele De Rossi, Claudio Marchisio and veteran poacher Gilardino, but all were squandered to varying degrees. Lazio’s Antonio Candreva was particularly impressive during this early stages, proving to the stymied Jordi Alba that he wasn’t the only sprightly wide man in town.

However, despite carving out multiple opportunities, Italy were unable to beat the last line of the Spanish defence with Saint Iker Casillas repelling all comers – a split-second reaction save from Maggio’s point blank header proving a highlight of the Real Madrid ‘keeper’s stellar night.

Lord alone knows what Casillas did to piss Jose Mourinho off so much last season, as it certainly doesn’t appear that a lapse in form was to blame for his first-team exile. The Spanish No.1 single-handedly (well, “double-handedly” if we’re going to be specific) kept his nation in the tie on numerous occasions before half-time. 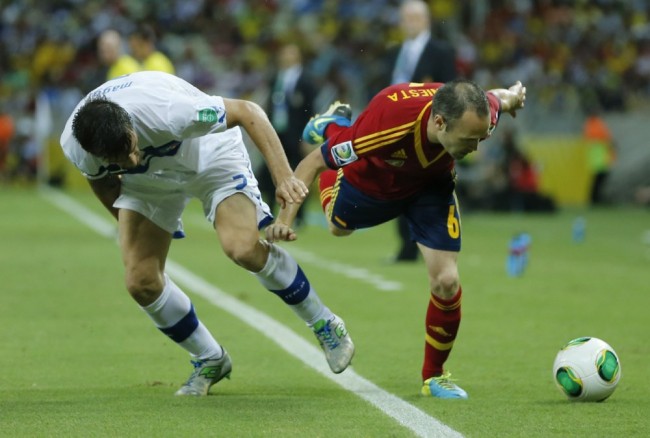 Fun fact: the gravity in Fortaleza is three times stronger than anywhere else on Earth

The second half was altogether less lively and, while the game was still open, both sides struggled for momentum as the oppressive heat began to sap at the stamina reserves. Spain tightened the screw my a modicum, with Andres Iniesta and Jesus Navas coming close shortly after the interval with Gigi Buffon atoning for his wobbly performances in the group stages with a string of fine saves – though, at the other end, Spain’s cross-Clasico central defensive pair Sergio Ramos and Gerard Pique (with his missus and her small and humble breasts watching on from the stands) had to fly into a couple of last-ditch tackles to preserve the virgin scoreline.

Despite it being the last thing that anyone out there needed as sweat cascaded from Spanish and Italian pores, a further half-an-hour of extra time was ushered in as a few more auxiliary midfielders were deployed by both coaches to pick up the slack – eventually leaving both countries without a recognised striker on the pitch (no Fernando Torres jokes please).

The lack of No.9 didn’t prove to be much of a hindrance for Spain with Xavi, Juan Mata, Iniesta, Pique and Ramos all fashioning themselves scoring opportunities before a cramp epedemic swept across the pitch. Spain went for it in the closing stages, but the Italian defence continued putting their knackered bodies on the line until the final, final whistle shrilled around the Estadio Castelao. 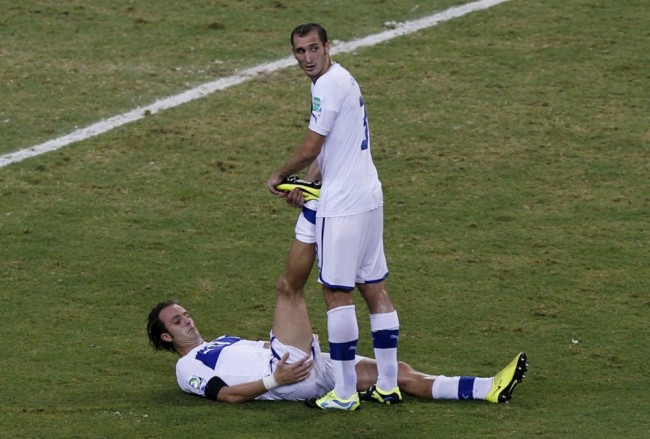 Just a quickie while no-one’s looking

With the tension almost palpable and 56,000 fans hissing in anticipation, old frosty bollocks Candreva had the audacity to put Casillas on his backside with an audaciously executed Panenka penalty to start the shoout-out, showing testicular fortitude of the highest calibre.

Twelve exquisitely-placed penalties followed as the recognised takers stepped up to the spot and did their duty amicably.

With the shoot-out having moved into sudden-death territory, Italy centre-half Leonardo Bonnuci was charged with keeping his country level-pegged with their continental foes. The Juventus man, par-boiled by the intense atmosphere, flinched at the crucial moment and sent his penalty arching over Casillas’ crossbar. The footballing God’s had rolled the dice. Bonucci was the man to suffer.

Jesus Navas suppressed his sympathy and masterfully clipped in the winner from 12 yards. 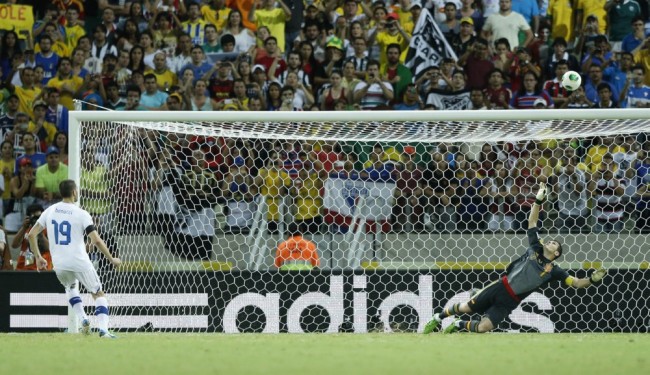 And so it is. Italy go out with their heads held high. As previously mentioned in an earlier round-up, the Azzuri have undoubtedly been the most engaging team at the 2013 Confederations Cup, providing us with great matches (for a variety of reasons) in all of their fixtures.

Not that it’ll mean a great deal, but at least Pirlo and friends will still have a chance to take home the wooden spoon and a concidilattory shard of pride when they take on Uruguay in Sunday’s third-place play-off in Salvador.

As for Spain, they have gifted us the final the world at large (and FIFA, you suspect) were after, though after such a grueling war of attrition in the previous round, you wonder if Brazil’s comparatively easy, sweatless passage to the final may prove telling. Fatigue is going to hit Spain like an atom bomb.

Highlights (we can only apologise in advance for the soundtrack)…