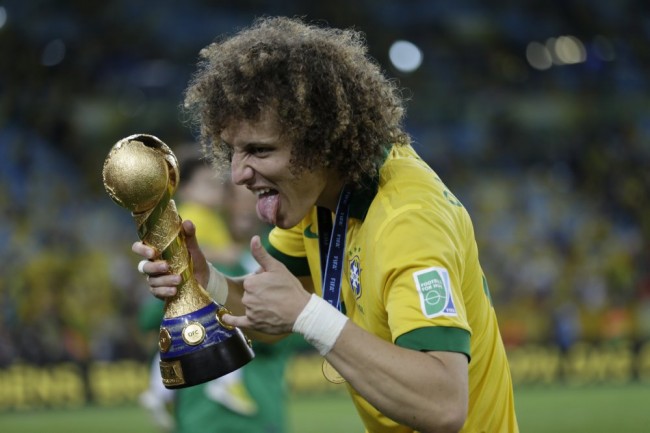 With just 34 days until the start of the Football League season and 48 till the opening day of the Premier League, the lack of football to imbibe over the summer months is usually enough to reduce us all to brain-dead zombies, lurching around with cold, dead eyes and involuntarily shouting “BALE TO REAL MADRID” and “SOURCES CLOSE TO THE SUN” in little old ladies’ faces at bus stops.

Yep, summers without football can be a living hell, though this off-season has seen none of the usual lobotomite dilapidation set in, thanks entirely to the Confederations Cup. This little tournament has given us a slew of great goals, a parade of fantastic games and some memorable moments. Nearly every minute of every game has been contested in the right spirit and what could easily be passed off as a pre-World Cup warm-up jolly has been treated very seriously by all taking part.

Before a ball was kicked in Brazil, every man and his dog had their heart set on a Brazil-Spain final at the Maracana and, lo and behold, that’s exactly what we were landed with.

On paper, a fascinating game lay in wait. With Spain having previously missed out on the Confederations title in 2009 due to a shock defeat at the hands of the USA, La Roja were out to win the only major international trinket that has thus far eluded Vincente Del Bosque’s all-smiting trophy hogs against Big Phil Scolari’s newly-galvanised Brazil, themselves desperate to usher in a new age of Jogo Bonito in front of a rapturous home crowd.

‘Twas truly The Will of a Nation vs. The Destiny of a Generation. Okay, I might be getting a little “Don King” there, but you get the picture! 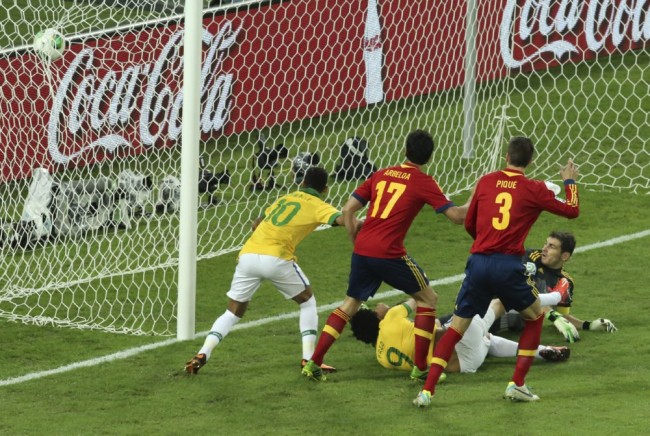 Fred gets Brazil off and running from a seated position

As previously stated, “Hino Nacional Brasileiro” has become more than just a national anthem to Brazil over the course of the past fortnight. The pre-game a capella continuation of the song has almost become a mark of identity for the nation during the Confederations Cup and it was no different last night.

The players, coaching staff and crowd roared the anthem as if it were not a pre-match formality but a collective cathartic war cry. With 73,500 voices bawling in unison, a deafening wall of noise resonated around the Maracana as Spain suddenly realised that these Brazilians were not about to just to lay back, spread themselves eagle and just let their esteemed opponents waltz their way to another trophy.

Perhaps the blaring cacophony actually did blow out a few Spanish eardrums, because Del Bosque’s side got off to the sort of start that would come to typify their evening. With just 96 seconds gone the ball was already in the back of the Spanish net, when Fred kept sight of the ball during a minor goalmouth skirmish and poked the ball past Iker Casillas, all while perched on his arse. It was a scrappy goal that befitted neither Brazil or Spain but, with just a minute-and-a-half played, the pressure was suddenly off. The whole of Brazil breathed out.

The past few years has seen everyone praise not only Spain’s impeccable passing but also their relentless pressing game. Well, it was Brazil’s turn last night to take the plaudits for that particular brand of donkey work. Similar to the way Italy squeezed the life out of Spain, Brazil constantly closed down any Spanish player on the ball, three-at-a-time on occasions, until the tika-taka was shelved and the reigning omni-Champs were reduced to mustering a light peppering of long range efforts.

While Brazil have never been famed for their defensive focus, they executed the ugly side of the game with aplomb in Rio last night.

Increasingly precious and disgruntled, Spain’s game became uncharacteristically hurried and scrappy as the usual inanimate Del Bosque prowled the touchline looking for answers. Frustration quickly set in as Alvaro Arbeloa and Sergio Ramos picked up early bookings. Brazil were no angels either, as baby-faced Oscar was also brandished with a yellow after nipping one too many Achilles tendon. The evening was threatening to boil over into a flurry of niggling fouls and stroppy gamesmanship. 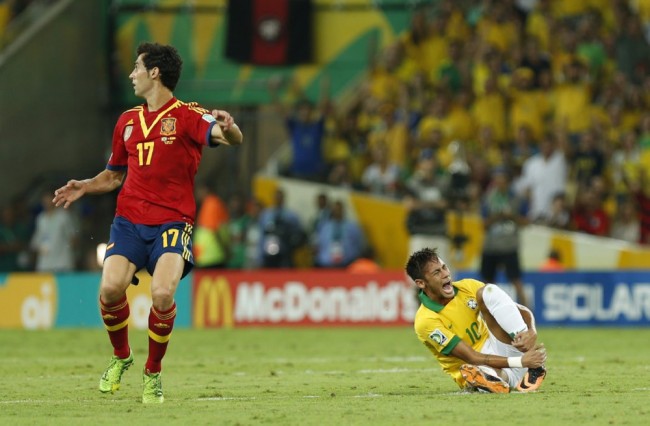 Neymar screams in “pain” after being shunted over by Alvaro Arbeloa

Spain almost got back into it just before the break; a quick break catching the Brazilian defence napping and allowing Pedro a one-on-one chance to level the score. Slipping the ball daintily past Julio Cesar, Pedro looked sure to have equalised, only for David Luiz to pull off an incredible, physics-defying clearance that saw a rolling shot seemingly destined for the bottom corner somehow deflected way over the bar. Often maligned for his naivety as a centre-back, Luiz has proved many times over the past couple of weeks that he can be a more than reliable defender when he puts his mind/hair to it.

Just when each manager looked to preparing their half-time bollockings as the interval loomed, Neymar kicked into life, exchanged a smart one-two with Oscar on the corner of the box, springing the weak offside trap and  battering the ball into the roof of the net to put more clear daylight between the two teams.

While it’s no mean feat to keep tabs on Neymar, Arbeloa (who had a shocker trying to keep abreast of his ridiculously nimble opponent), should have perhaps done better job marshaling the Brazil No.10 having squared him up, but the fleet-footed striker just had too much class and too much zip for the Real Madrid right-back, who no doubt cannot wait to repeat the feat in the first El Clasico meeting next term!

As for Neymar; well, the boy stepped out of Youtube and into the real world, having really come of age this tournament, showing the watching world elongated glimpses of the greatness that is yet to come. Barcelona had a bit of a torrid(ish) time of it last year. Neymar playing off Messi could be the injection that they sorely(ish) need. 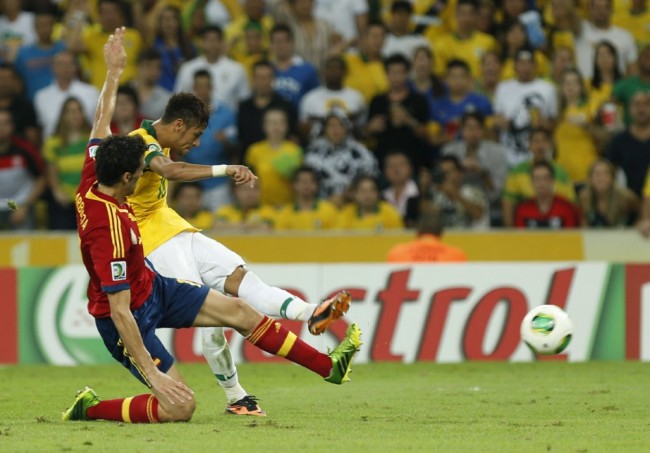 Cut to the second half and Arbeloa was put out of his misery (though not in the Biblical sense), being replaced on the right-hand side by Chelsea’s Cesar Azpilcueta. This didn’t help much though as Brazil swiftly notched a third for themselves – a ball through the middle, dummied by Neymar, fell to Fred who calmly slotted it past Saint Casillas to grab his second of the night and fifth for the tournament on a whole.

Fred really is a riddle, systematically both a bit rubbish and formidable. There’s none of the finesse usually associated so readily with Brazil’s honour role of former out-and-out frontmen, but his pathological refusal to leave the 18-yard box results in him always being plonked in the optimum position to scruffily apply the final touch. He knows his role and he does it well. No wonder they love him.

The third goal was pretty much the final nail in the Spanish coffin, but not before they fathomed themselves a brief glimmer of hope . With Christ the Redeemer looking on, his namesake Jesus Navas (who has impressed in fits and starts during the tournament) won his team a penalty after being clumsily legged-up in the box. Call it divine intervention or just sheer bad luck, but the usually reliable Sergio Ramos dragged the resulting penalty well wide. The glimmer was immediately extinguished. It just wasn’t going to be Spain’s night and things were about to get just that little bit worse.

Looking to add a fourth, Neymar sprinted away on another lethal Brazilian break only to find himself cynically brought down by future Barca teammate Gerard Pique. Being the last man, referee Bjorn Kuipers had no choice but to produce a red, much to the disgust of Shakira and the amusement of the entire Maracana crowd as Lawro gleefully informed us that Pique “wouldn’t be getting any cocoa tonight”. 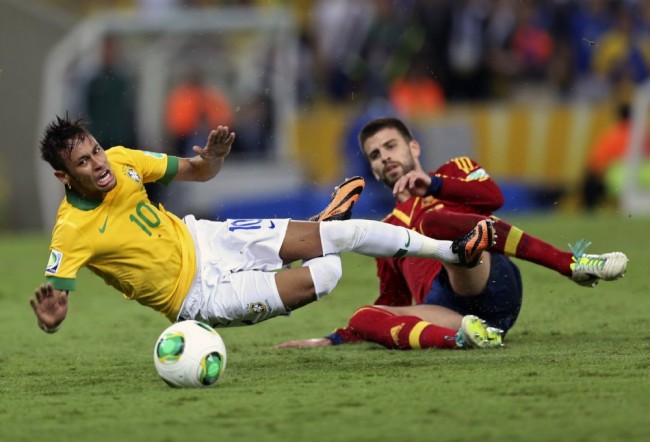 Pique p-p-p-picks up a red card

At this point you just wanted the referee to put Spain out of their misery “Old Yella” style. Nobody likes to see players of this quality reduced to quivering gelatinous messes (I actually rather enjoy it – Chris, Ed) but they valiantly soldiered on.

Brazil had clearly done their home work. Perhaps Big Phil had ordered a few more re-watches of the Champions League semi-finals where both Bayern Munich and Dortmund tore Barcelona and Real Madrid a new one. The Spaniards really are taking magnificent spankings when it counts of late!

Come the final whistle, a new chant was echoing around the Maracana, “The Champions Are Back”, such was the validation on show from a previously cynical population.

Although this wasn’t the most strenuous of tournaments, Brazil have recaptured a bit of the ethereal magic that their famous predecessors had in abundance. There is still some improvement needed in certain areas but on last night’s evidence there is no reason why this team cannot be contenders at the World Cup on home soil and with the nation’s footballing fandom back on side.

Spain on the other hand look crestfallen and utterly knackered, with the grind of the semi-final against Italy obviously being a diminishing factor. Indeed, they were all on the flight home as early as the 96th second. Such is the short-termism in football these days, many have seen Brazil’s resounding victory as some kind of impending death knell for Spanish football, which is – frankly – cobblers. Sure there are wounds to be licked and prides to be undented, but we’re fairly sure they’ll be alright as they sunbathe away the pain for a week next to the pool of a five-star hotel in Antigua.

So, that’s your lot as far as the 2013 Confederations Cup 2013  is concerned and, to be honest, if this is an example of things to come in Brazil next year then June 12th 2014 can’t get here soon enough!

Let’s just hope FIFA have brainstormed a new format for their unnecessarily awkward and tawdry post-tournament award presentations by then.