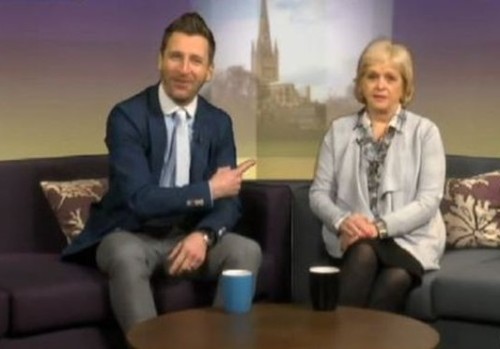 Just to get you up to speed, Eadie retired in 2003 and now fronts The Mustard Show (a sort of regional knock-off of The One Show) alongside former BBC Radio Norfolk presenter Helen McDermott.

The trouble began when the pair were enjoying some fairly passive-aggressive patter on the sofa before Eadie began a segment link by referring to McDermott as a “relic”.

Taking over the reigns, McDermott – rather fantastically in our opinion – replied: “This is what happened when this c**t went to Happisburgh beach to look at some fossils or something.”

Here’s the offending clip in question, which obviously contains a bit of iffy language for those of you joining us from a monastery, etc…

The pre-recorded snippet was accidentally was broadcast yesterday at tea-time, with complaints rolling in shortly thereafter.

As such, Mustard TV have humbly apologised for the error, with managing director Fiona Ryder telling BBC Norfolk: “Helen and Mustard TV are sorry for this lapse and any offence caused.”

Quite. Does Mrs McDermott know she’s talking to Norwich City’s inaugural Hall of Fame inductee there?

She should be bloody well ashamed of herself.