Real Madrid made it an incredible 40 games unbeaten on Thursday night, with Zinedine Zidane’s side drawing 3-3 away to Sevilla in their Copa del Ray last 16 second leg clash.

The result sees Los Merengues proceed to the quarter-finals via a 6-3 aggregate score as well as beating Barcelona’s Spanish record of 39 games unbeaten, which was set in 2016. 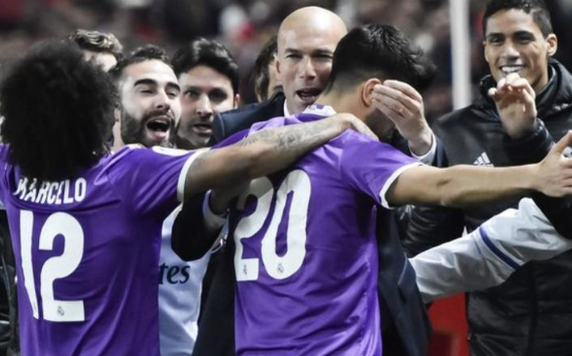 Marco Asensio has blossomed under Zidane and the attacking midfielder netted a superb goal just after half-time, running almost the entire length of the pitch with ball before firing home to make it 1-1…

A Danilo own-goal had given the hosts the lead on 10 minutes and former Manchester City forward Stevan Jovetic then scored on his Sevilla debut.

A Vicente Iborra goal made it 3-1 to Sevilla as Madrid’s hopes of extending their unbeaten run looked dead and buried.

However, a Sergio Ramos Panenka penalty made it 3-2.

Then, at the death, Karim Benzema netted a superb individual equaliser (below) meant that the Madrid giants went one better than their Catalan rivals.

What a start it has been for Zidane in the Bernabeu hot-seat, winning the Champions League, Club World Cup and UEFA Super Cup while only suffering two defeats in total since taking charge in January 2016.