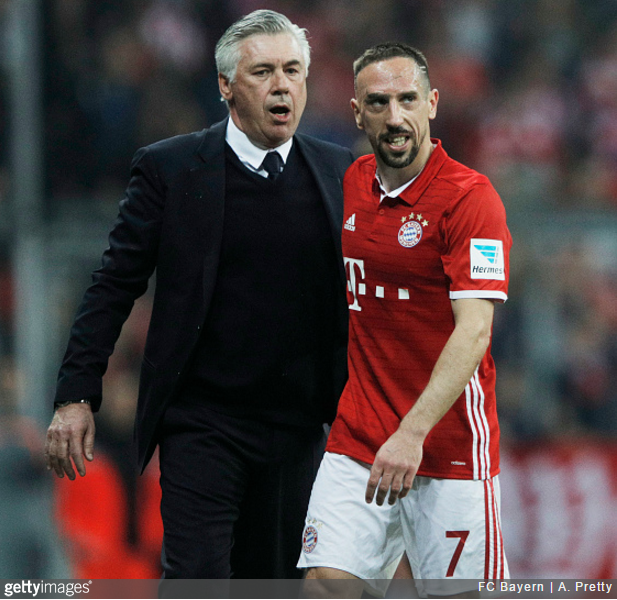 Bayern Munich spanked an injury-hit Borussia Dortmund on Saturday night to go 10 points clear at the top of the Bundesliga.

Franck Ribery opened the scoring after just four minutes, with goals from Robben and Robert Lewandowski (2) fleshing out the winning margin in Bayern’s favour.

With the score already at 4-1, Carlo Ancelotti decided to haul Ribery off for the final 15 minutes – a decision that didn’t sit too well with the grumpy French winger.

Indeed, Ribery, who turned 34 the day before the match, threw a bit of a tantrum as he trudged off the pitch, right up until the point that a surprise smooch from his manager instantly turned his frown upside-down…

Speaking to Sport1 after the match, it seems that Ribery was suitably impressed with Ancelotti’s tender technique:

We have a great relationship and we trust each other.

The kiss was nice. It was just natural, something positive. It was a good kiss with a lot of emotion.

However, Arjen Robben, who threw a similar tantrum after being subbed off against Borussia Monchengladbach a week or two ago, was left harbouring a curious case of green-eyed envy:

Yes, I am a bit jealous. But I might get a kiss from Carlo as well at some point.

Well, the Italian is certainly famed for his studious man-management, although we’d didn’t imagine things were quite so intimate.