The 3-1 defeat proved to be the straw that buggered the camel into submission, leaving Gasperini with a pretty woeful record of one draw and four defeats in his first five competitive games.

Inter, who currently sit down in 17th place in the Serie A table and look completely sapped of all morale after Gasperini’s first month in charge, issued the following statement a few minutes ago:

“The club thanks Gasperini for his effort he showed in developing the role, and expresses regret at the interruption of the working relationship.”

‘The interruption of the working relationship‘? That’s one way of phrasing I suppose. Given Massimo Moratti’s expression at the final whistle against Novara, it’s hardly surprising Gasperini was given the elbow… 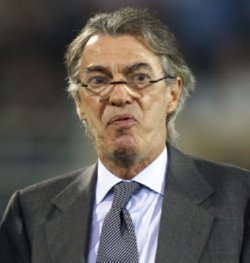 If that’s not a nailed-on ‘you’re getting fired in the morning’ face then I don’t know what is!

For the record, the smart money seems to be on Claudio Ranieri stepping into the breach, we’ll keep thee posted.