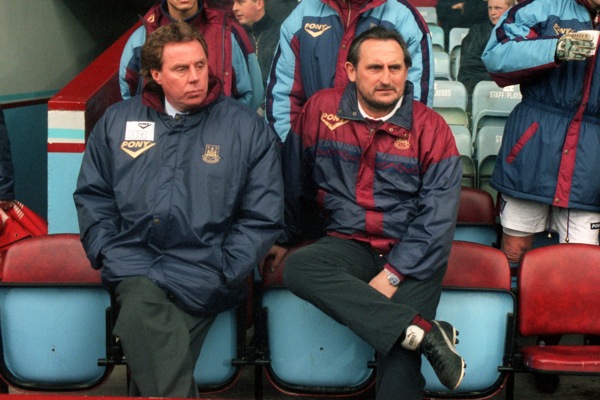 Harry Redknapp on the West Ham bench with Frank Lampard Snr, in 1996

ENGLAND’S stock might be at an all-time low after their disastrous World Cup, but it is a small mercy that they haven’t disgraced themselves quite enough to require the services of Harry Redknapp. A man so slippery he could hoist himself out of a vat of cement, during the World Cup Redknapp could be seen delivering pithy one-liners on the BBC sofa to an array of fawning sycophants. Asked whether Tottenham were interested in the Japan forward Keisuke Honda, Redknapp quipped, “We asked CSKA about a swap for Bentley, but we didn’t think it was fair. A Bentley for a Honda!” Ha ha ha Harry! How very whimsical.

Redknapp is the man who disproves the theory of karmic retribution, seemingly never punished for his wrecking-ball approach to football management, each calamity somehow rewarded with an even better job. He is the man who managed to unite the fans of Portsmouth and Southampton in one common goal: hating Redknapp. That takes some doing. And yet for some unfathomable reason, all of his misdeeds somehow manage to disappear from public consciousness, as if by some Faustian pact.

Because of his roguish cockney demeanour, some journalists hang on his every word. When, before an England friendly against the Czech Republic in 2008, he had the temerity to criticise That Foreign Man Fabio Capello, simply for having the England job he assumes he should rightfully hold, this was reported without irony. After all, what do countless titles in Spain and Italy and a Champions League really amount to in the face of one spawny FA Cup victory with Portsmouth?

May I be so bold as to suggest Redknapp is definitely not the managerial genius his chuckling media chums have made him out to be? There is a certain beguiling nature to Redknapp’s ability to wing it, a quality he owes in so small part to our willingness merely to sweep certain misdemeanours under the carpet. Naturally, of course, that takes a pretty big broom.

FORGET, for a moment, the way he treated Portsmouth and Southampton and cast your mind back to the winter of 2000, and the way Redknapp wasted the £18m West Ham received from Leeds United for Rio Ferdinand. Believe it or not, at the time West Ham had a pretty accomplished team, which was admittedly the result of some considered work by Redknapp. West Ham had finished 8th, 5th and 9th over the three preceding seasons, and after a shaky beginning to the 2000-01 campaign, by November they were starting to motor.

After a 2-1 defeat at home to Arsenal in October, West Ham subsequently went on a five-match unbeaten run, which reached a crescendo with a 1-0 victory at Leeds, who were title contenders at the time. That success was achieved largely thanks to the sterling efforts of Ferdinand. By then, it was recognised that West Ham could not hold on to this prodigious youngster for much longer. Indeed Leeds had already registered their interest in him, and as he kept Mark Viduka firmly in his pocket all afternoon, the travelling West Ham fans sang, “You’ll never get our Rio.”

Famous last words. Ferdinand joined Leeds for £18m the following Friday. This was not exactly a disaster; West Ham were worried that the transfer market was about to collapse and the funds would offer them the chance to fine-tune an already promising squad, one that contained Paolo Di Canio, Freddie Kanoute and Trevor Sinclair, plus gifted tyros Joe Cole, Michael Carrick and Frank Lampard. While the sale of Ferdinand showcased a lack of ambition, it was not catastrophic. Calmly play the hand Leeds had dealt them and West Ham could potentially qualify for Europe.

That feeling was backed up the day after Ferdinand’s departure, when a free-flowing performance was enough to earn a 3-2 victory at Southampton. At this point West Ham were about as rampant as it is scientifically possible for them to be. They lost just one of their next six games, a 2-1 defeat at Leicester City, and produced one of the finest performances I’ve ever witnessed, stuffing an outclassed Charlton Athletic 5-0 on Boxing Day.

That shellacking of their south London neighbours left West Ham eighth, above Chelsea, Tottenham and Leeds, and just six points off Sunderland in third. At that juncture, there was little to suggest that Redknapp would be gone before the end of the season. 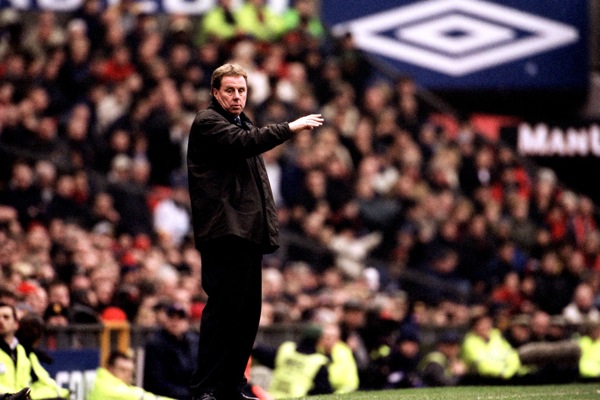 This was an exciting time to support West Ham. Every day, the papers would link them with a new player – but as each day passed, so the targets disappeared. The last time West Ham had cashed in on one of their prized assets, it had been a shrewd move, as Redknapp used the £7.5m Wimbledon paid for an overweight and uninterested John Hartson in 1999 to bring in Scott Minto, Marc-Vivien Foe and, of course, Di Canio.

In this instance, he was dealing with different sums. £18m is a hefty figure, enough to make any man lose his nerve. And the comparison between Hartson and Ferdinand doesn’t really fit; one a nomadic if talented striker, the other a genuinely world class player who would eventually join Manchester United for £30m and captain England.

Among others, West Ham were linked with expensive moves for Gareth Southgate, Robbie Keane, Andres D’Alessandro and the prolific Spanish striker Javi Moreno. Even Neil Harris got a look-in. None of them arrived. Instead, from a position of strength, Redknapp was unable to shake off his wheeler-dealer instincts and did what he knew best, looking at strays, cast-offs and bargains, squandering the money like a Eurotrash moron in possession of his dad’s credit card.

Southgate, having fallen out with John Gregory, was eager to leave Villa and return to London, but the deal never materialised, and rather than sign one international defender to replace the one who had vacated the club, Redknapp chose to sign four mediocre players. In came Christian Dailly (£1.75m), Rigobert Song (£2.5m), Hayden Foxe (free) and Ragnvald Soma (£800,000). Rejected by Keane, Redknapp also paid Liverpool £2.2m for Titi Camara and Litex Lovech, £500,000 for Svetoslav Todorov. Kaba Diawara, Hannu Tihinen and Sebastien Schemmel were also signed on loan, although only the latter ended up with a permanent deal.

The spending totals £7.75m, leaving roughly another £10m, if you discount the massive contracts that were handed out, which made it difficult for West Ham to shift those jokers. The rest of the money was never seen in the transfer market, making it tempting to exonerate Redknapp and just blame the despised chairman, Terry Brown. West Ham were in the process of building a brand-new stand and it is eminently likely that some of the money was used to finance it. And yet, although it was never proved, there were also allegations made that Redknapp was persuaded by Brown not to spend the money, although the rumour remained precisely that: a rumour. 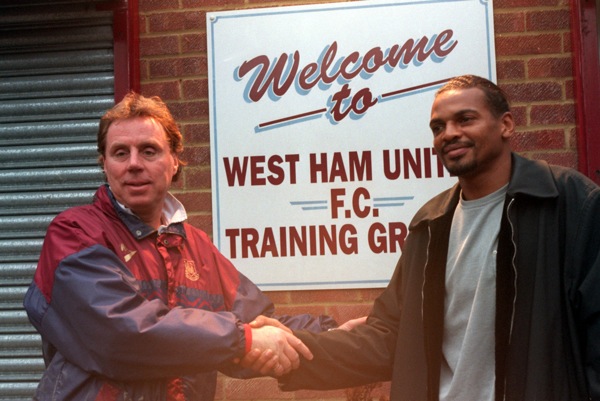 Whatever, the signings Redknapp did make were, to a man, unmitigated disasters, particularly Camara, whose comically disproportionate contract cost West Ham millions. He had arrived with a mildly pleasing reputation after a decent first season with Liverpool, but out of shape, he made seven starts in three years with the club and failed to score a single goal. His first start came in the aforementioned defeat at Leicester, a match in which he squandered several chances, even managing to send the ball out of Filbert Street with one volley. Eventually West Ham cut their humungous losses and cancelled his contract in 2003. Todorov, a Bulgarian youngster, fared little better, although he did manage a goal on his first appearance at Upton Park, scoring in a 3-2 defeat to Tottenham in an FA Cup quarter-final. Redknapp’s replacement, Glenn Roeder, didn’t fancy him and in 2002 Todorov joined Portsmouth, where he carved out a reasonable career.

It was the defenders who caused the most disquiet though. Soma, a hapless Norwegian youngster, barely played; the enduring memories I have of him are an abject stint at left-back in a 7-1 defeat to Blackburn and a severe chasing administered by Chelsea’s Jimmy Floyd Hasselbaink in 2002. Song, like Camara, was another Liverpool flop, although he at least initially showed some promise, so much so that West Ham fans mimicked their chants of ‘Rio! Rio!’ towards Ferdinand by singing ‘Rigo! Rigo!’

That happy little arrangement lasted all of seven games. In the first minute of a match at Manchester United, Song picked the ball up in the right-back position and, to the dawning horror of all those watching, proceeded to dribble the ball across his own area, scuffing a clearance straight to Ole-Gunnar Solskjaer and watching as the striker scored. Signed in November 2000, Song left in November 2001. Foxe’s sole contribution was to piss in a plant pot at a Christmas party. Oddly the only player to emerge with any credit was Dailly, who played the most public part in West Ham’s relegation in 2003. He was a dismal Premier League defender, but found his niche as a cult figure in The Championship, a status that was secured in a play-off semi-final against Ipswich, when he scored the winner with his knackers, an ironic twist of fate considering his galling impotence until then.

Somehow Redknapp managed to escape the blame for his abysmal signings, and although it was only a two-month spell in his career, the foolishness cost West Ham. Eighth in December, they only won three games in the second half of the season and only dragged themselves away from a relegation battle by beating Southampton in their penultimate match. Redknapp was sacked the following Monday for making criticisms of Brown in a fanzine, and was succeeded by Roeder, the cheap option.

The appointment of Roeder, out of his depth in management, gave Redknapp, the fans and the media a handy scapegoat when West Ham were relegated in 2003. Yet Roeder took over Redknapp’s derelict squad in 2001 – the truly remarkable achievement was lifting West Ham from 15th to 7th in his first season in charge. Unfortunately for the Redknapp-sceptics, Roeder’s portrayal as a clown and Redknapp’s as a wronged talent-spotter is a far better fit in the mythology. You’d have to admire the bare-faced cheek if it wasn’t so downright dastardly.

Jacob Steinberg is a freelance sports journalist for The Guardian, blogger for mirrorfootball.co.uk, and – for his sins – a professional West Ham fan