Arsenal missed out on a great chance to go top of the Premier League table on Saturday, going down 2-1 to West Brom on a horrible afternoon for the north Londoners. 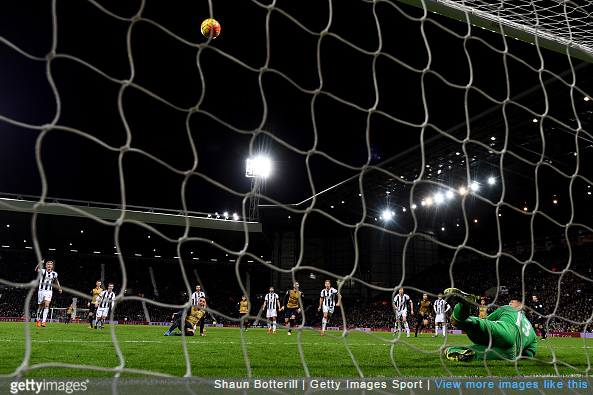 Unsurprisingly, the visitors dominate possession from the off, but the loss of Francis Coquelin to a knee injury after just 14 minutes was hardly the start Arsene Wenger hoped for. Club captain Mikel Arteta took the Frenchman’s place and just before the half-hour mark, the visitors took the lead when Oliver Giroud headed home a Mesut Ozil free-kick. That took the German’s run of assisting in consecutive Premier League games to seven, an outright all-time record in the competition. However, the Baggies were dogged throughout and got back on level terms, when James Morrison deftly volleyed home from a free-kick. Although the Gunners’ defence really should’ve done better.

Things then went from bad to worse for Arsenal when Arteta put re-directed a James McClean cross past Petr Cech and into his own-goal. Soon after the re-start, the Spaniard’s nightmare cameo came to premature end, with yet another injury forcing him off, to be replaced by Mathieu Flamini.

The Gunners upped the pressure as they went in search of an equaliser, with Alexis Sanchez a constant threat. Although West Brom did have a great chance to score when Jonas Olsson’s header came back off the bar and bounced up off the goal-line. Sub Joel Campbell then miscued from close-range before, on 83 minutes, Arsenal had a great chance to get back on level terms, when Sanchez was felled in the box by Chris Brunt. However, in what was the final icing on a particularly rotten cake for the visitors, Santi Cazorla slipped as he took the resulting spot-kick, with the ball sailing high over the Baggies’ goal.

The result sees West Brom move up to 12th while Arsenal now find themselves in fourth with even more injury problems to deal with ahead of a busy schedule.