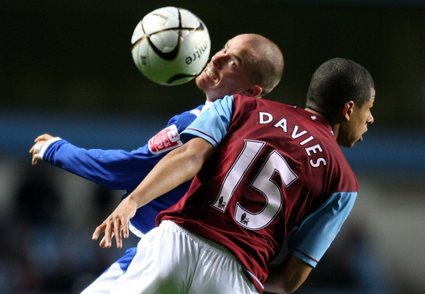 Since West Brom were relegated from the Premier League, Pies has come to expect the occasional arrogant outburst from young centre-back Curtis Davies. The 22-year-old has been eager to tell all and sundry just how good he is – too good for the Championship and ready for the Premier League again. So after his disastrous debut in Aston Villa’s Carling Cup exit last night, Pies could easily allow itself a little chuckle at Davies getting his comeuppance. But we’re not going to.
It seems young Curtis had a bit of an epiphany as he trudged off the pitch to be substituted on 80 minutes last night and has seen the error of his ways. He said: “I was just awful. I didn’t contribute anything. I’ve been bigging myself up, saying I’m ready and obviously I’m not. I’m not good enough to get in the team yet. I’m honest with myself in every performance and that was rubbish – I looked like a pub team player.” Nuff respect for that frank appraisal.