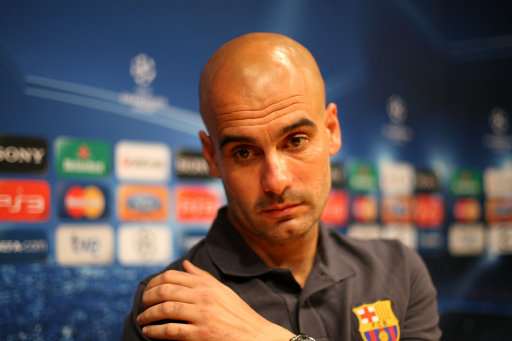 Regardless of the two Champions Leagues and the 11 other trophies he’s won since 2008, it seems the shame of conceding a Fernando Torres goal was too much for Pep, as Reuters are reporting that he’s announced this morning that he’s to stand down as Barcelona coach at the end of the season after five years in charge at the Camp Nou.

Whether or not leaving after such as a disappointment as the Catalans’ shock Champions League exit is the best decision to make remains to be seen, but there are now two very interesting questions on everyone’s lips – 1) What next for Guardiola himself and 2) who will replace him in the Barcelona hot-seat.

The young whippersnapper is expected to take some time off from football (probably an entire year), but when he is ready to return he’ll have a queue of suitors prettying themselves for him.

A known fan of the Premier League, could Pep end up at Stamford Bridge, or maybe the Etihad? Another theory doing the rounds is that he may take over at Arsenal when Wenger decides to quit. Or is he Fergie’s replacement at Old Trafford? What do you think?

And as for who’ll take the hot seat at Barca, Big Sam is probably waiting eagerly by the phone, though surely Athletic Bilbao boss Marcelo Bielsa is in with a shout? That said, interestingly, former Barca player Ernesto Valverde – who was a huge success at Olympiakos – is said to be the current favourite.

Or what about my outside bet – Alex McLeish (taking Emile Heskey with him, of course)?