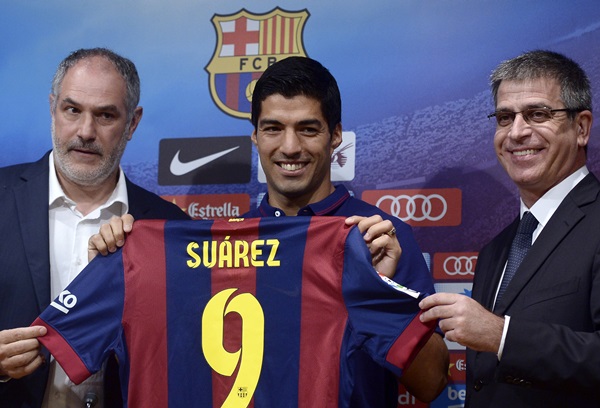 Speaking at his grand Barcelona unveiling, Luis Suarez fielded questions about what he got up to on his summer holibobs this year.

Still serving his four-month ban for feasting upon the flesh of Italy centre-back Giorgio Chiellini, Suarez had some reassuring words for Barca fans: he pinky-promises not to bite anyone again:

“I say to fans, don’t worry, because I won’t do that any more.

“[It’s] something that happened and afterwards I was really depressed and didn’t feel like doing anything.

“I spoke to my psychologist and he said I had to face it and say sorry.

“I did – now I would rather focus on the present, which is Barcelona.

“I am speaking to professionals – the right professionals but it is a private matter and I don’t want to comment further on that.”

A fully-grown adult professional sportsman having to reassure everyone that his biting days are over. Amazing.

Barca also caused a bit of a stir at Suarez unveiling when they claimed to have paid Liverpool just £65million for the striker despite his release clause standing at £75million.

“Negotiations started before the World Cup and we worked hard to come to a final figure of £65million,” spluttered club vice president Jordi Mestre.

“We were originally quoted over €90million (£72million).”

Without wishing to sound overtly cynical, we wouldn’t trust Barcelona’s little financial reports as far as we could throw them.

This being, of course, the very same club who initially claimed they’d only paid €54million for Neymar.