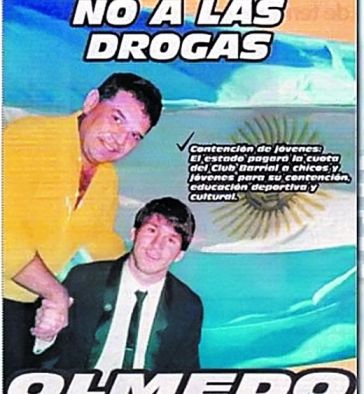 “Yes to sports, no to drugs, Olmedo for governor”

Spare a though for poor Leo Messi. The little tyke must get his photograph taken shaking hands with a hundreds strangers every day and, once in a while, those photos just so happen to get unlawfully grafted onto the campaign posters of possibly corrupt, definitely bigoted South American politicians.

Alfredo Olmedo is a congressman who is running for governer in Salta (a remote, poverty-stricken province in Northwest Argentina) this year and has used an image of he and Messi (allegedly taken in an airport arrivals lounge) to help publicise his bid.

Olmedo rose to prominence in his native Argentina after making ‘inflammatory comments’ following the passage of a national law that saw gay marriage legalized last year, and for his recent campaign to address the rising rate of youth unemployment and crime by bringing back compulsory national service for men aged 18 and over – looks like we’re dealing with a true visionary here.

Rather predictably, Messi hasn’t taken to this new-found association particularly keenly, and has begun legal proceedings to sue Olmedo – with his attorney, Ricardo Giusepponi, telling anyone who’d listen:

“The photo could have been altered. Maybe it was taken at the airport in Buenos Aires, where so many people greet Lionel.

“I’m sure he didn’t know who Olmedo is or what he represents.

“Olmedo can’t act in such a brazen manner. Messi doesn’t participate in politics nor is he supporting any candidates.”