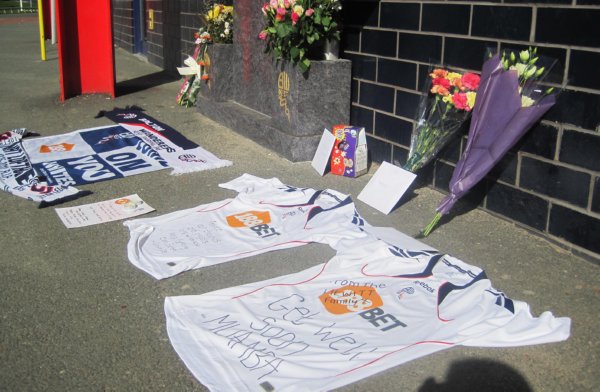 Empathy and support came flooding in from the four corners for Fabrice Muamba as he was rushed to London Chest Hospital’s intensive care unit in a critical condition; Andrea Pirlo dedicated Juventus’ victory over Fiorentina to him, fans of both sides chanted his name from the 41st-minute of Manchester United’s 5-0 thumping of Wolves at Molinuex, former teammate Gary Cahill had an undershirt printed up in support and Real Madrid followed suit shortly after.

While Muamba was being kept alive on an intravenous drip, a 21-year old Swansea University student by the name of Liam Stacey took to Twitter and let loose with a couple of choice tweets (click for full size image – expletives have been censored) about the stricken Bolton midfielder…

Unsurprisingly considering the widespread concern for Muamba, Stacey’s tweets drew a lot of heat, with several fellow users reporting him to police forces across Britain. Stacey used Twitter once again to proclaim his innocence, claiming his account had been hacked and that he wasn’t responsible for the offensive messages. He was arrested the following day.

According to the BBC, magistrates later heard that Stacey was close to tears when he admitted to the court that he was in a pub (having been drinking from early afternoon on Saturday) when he posted the tweets:

“I was at the bar when I heard what had happened to Muamba. I don’t know why I posted it. I’m not racist and some of my friends are from different cultural backgrounds.”

Stacey has since been bailed until he is sentenced on March 27th and has been ordered not to use Twitter or any other social networking sites.

There has been some debate as to what Stacey actually said constitutes a crime, though I’d wager that publishing racist dribblings in a public forum is illegal and therefore punishable by law. ‘Free speech’ doesn’t really apply.

However, surely the underlying mystery is why anyone, regardless of their prejudices, would feel the need to broadcast that particular sentiment in the first place? Unless, of course, being an absurdly unfeeling and abusive moron automatically overrides your sense of empathy and basic human decency.

The saddest aspect is you can probably bet your bottom dollar that Stacey wasn’t the only one spouting such filth after Muamba collapsed along the internet’s shit-strewn recesses. It really can be a sick, sorry place sometimes.

As for Muamba himself, the good news is that he’s showing ‘small signs of improvement‘ and is now no longer reliant on medication to keep his heart beating, while he’s also able to move his arms and legs.