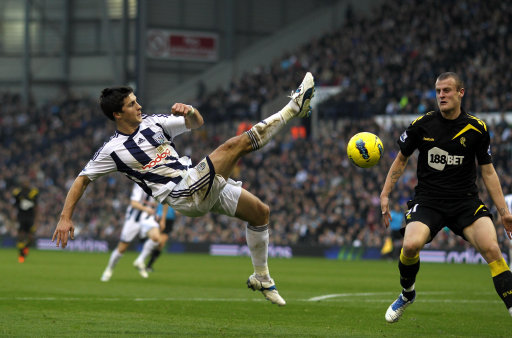 Ireland striker Shane Long made a surprise comeback from injury to net the winning goal in an entertaining game at The Hawthorns.

It is only four weeks since the former Reading man sustained what looked to be a serious knee injury after a dismal challenge from Aston Villa’s Alan Hutton, however his 56th minute goal would prove enough to earn Roy Hodgson’s side a valuable win against Bolton.

Long’s team-mate Jerome Thomas, who was impressive all afternoon, opened the scoring on 16 minutes after some good work from Zoltan Gera. However, just five minute later the Trotters were awarded a spot-kick after Thomas fouled his fellow former-Arsenal starlet Fabrice Muamba in the box. Ivan Klasnic put away the penalty to level the scores, but while both sides had chances to win the game, it was Long who would provide the decisive blow, netting from a superb Nicky Shorey centre.

While the Baggies bounce into the top 10 in the table, Owen Coyle’s Bolton continue to struggle in the bottom three.