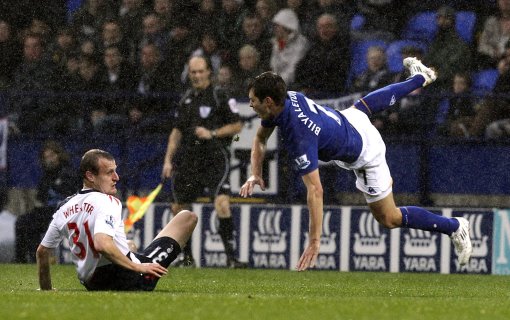 Any hopes Owen Coyle’s Bolton side had of securing a vital victory against Everton on Saturday were extinguished after just 10 minutes when David Wheater saw red for a dangerous tackle on Diniyar Bilyaletdinov.

The visitors totally dominated the rest of the proceedings, but were guilty of profligacy throughout. However, just after the break, the afro-tastic Marouane Fellaini slotted home a Bilyaletdinov cross to open the scoring. Super-sub Apostolos Vellios made it two late on inthe game after good play from Leighton Baines and Tim Cahill.

Perennially slow-starters Everton are now up to eighth in the table now while the Trotters stay in the bottom three.