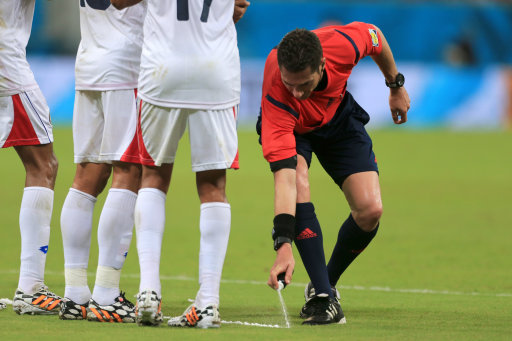 Bad news, folks. Thanks to a ruling made by a prominent German product safety organisation, the free-kick vanishing spray that has revolutionised the way football is played across the world will not be allowed to be used by referees in Germany’s Bundesliga.

After several weeks of experimentation, the happy-go-lucky people over at the Technischer Überwachungs-Verein (TÜV) have decreed that referee’s will be prohibited from using free-kick spray in the German football league after the foam tested positive for “hormonally active” ingredients, as well as falling foul of several other safety requirements.

It was originally planned for the spray to come into use in German football on 18th October, but those plans were later shelved when the German football federation (DFB) found the spray could not be used as it wasn’t approved or manufactured in the EU (it’s made in Argentina, apparently).

According to Bild, the DFB then had TÜV test the spray extensively, with the safety auditors finding that not only did it contain suspicious “hormonally-active” parabens but that it was also sufficiently flammable to require labelling as such on the canisters – labelling the spray does not currently carry.

It’s all very exciting so far, isn’t it?

But wait! There’s more! As well as being chock-full of parabens and a slight fire hazard, the spray also contains a fairly high amount of greenhouse gases – much more than is allowed on unmarked packaging.

Also, the text and instructions of use on the spray canisters and their outer packaging is not in German – another statutory requirement.

Woooo! All this regulatory stringency is making us weak at the knees!

The long and short of it is, as things currently stand, any referee who uses the spray during a Bundesliga game is liable to receive a fine and also be subject to legal proceedings.