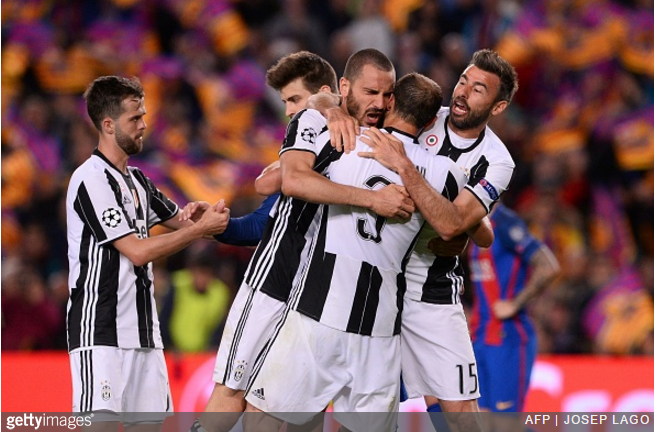 After stuffing their opponents 3-0 in the first leg, Juventus put on a trademark defensive masterclass to keep Barcelona at bay for 90 minutes at the Camp Nou and book themselves a place in the Champions League semi-finals.

Barca threw everything at Juve, especially in the first half, with the darting runs of Neymar (whose chosen hairstyle for the evening appeared to be a tribute to ‘Joe vs. The Volcano’-era Tom Hanks) and Lionel Messi proving to be of particular concern for the Italian side’s resilient back-line.

However, the Inglorious Bastards (as we’re assured they refer to themselves), marshalled expertly once again by Giorgio Chiellini, stood firm against the blaugrana onslaught, limiting the hosts to speculative efforts from awkward positions.

Messi did manage to break through at one point, though unfortunately it was into his own nasal cavity from a great height…

And that’s pretty that for match narrative – Barca kept hassling and haranguing to no avail, Juve defended like lions and broke (rather tamely, in general) on the break until the whole thing petered out.

Indeed, the match began to drag in the final throes as Barca visibly tired, eventually ending up at ‘saunter’ pace as the minutes wicked away.

Come the final whistle, and yet another blow in what is proving to something of a fallow year for Barca, Neymar found the aggregate defeat rather hard to take…

Cuadrado & Dani Alves with Neymar who was in tears. pic.twitter.com/xnQ48HPCTr

As if to compound it, for all their huffing and puffing, Luis Enrique’s charges recorded just one shot on target throughout the entire evening – the first time they’ve produced so little attacking threat in a Champions League match since 2009.

On the other hand, it’s now nearly nine hours since Juve last conceded in Europe.

Pretty much tells you all you need to know.