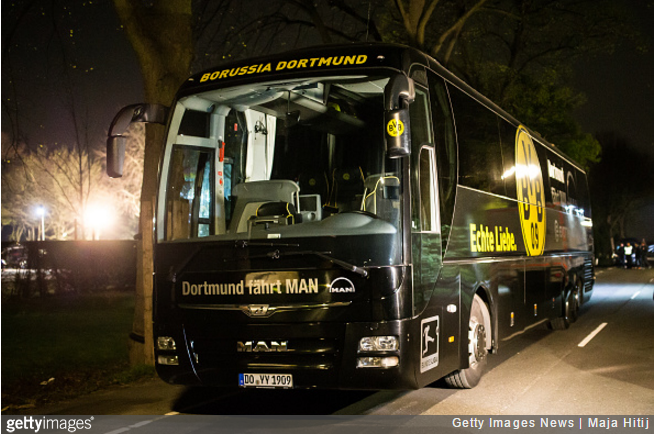 Police have arrested a man on suspicion of carrying out the explosive attack on the Borussia Dortmund team bus before last Tuesday’s Champions League game against Monaco.

Notes discovered at the scene (immediately described by investigators as “dubious”) appeared to claim responsibility in the name of Islamic extremists, though prosecutors are now alleging that the motive may, somewhat oddly, be entirely financial.

According to the Independent, a 28-year-old German-Russian citizen known only as ‘Sergej W’ was arrested by a police tactical response unit on Friday morning in connection with the attack, that left defender Marc Bartra needing surgery on a broken arm.

He [Sergej W] has been charged with attempted murder, causing an explosion and serious bodily harm, police said.

It’s also being reported that Sergej W instigated the bombing to negatively effect the price of shares he’d previously bought in Borussia Dortmund themselves.

This from the BBC World News:

He would have profited from this fall.

It’s also being reported the man responsible was staying in the very same hotel used by the Dortmund team on the day of the attack.

The suspect placed the bet on 11th April using an IP address traced to the hotel, after taking out a loan for the money.

Radicalised Capitalism. Just when you think you’ve heard it all…

It’s like some kind of deranged GTA V live-action fantasy.