Michy Batshuayi has responded to UEFA’s decision to close its investigation into a complaint from the striker over racist chanting during Borussia Dortmund’s Europa League clash with Serie A side Atalanta last month.

The Chelsea loanee Tweeted after that game, which ended 1-1, that he had heard ‘monkey noises’ in the stadium…

2018 and still racists monkey noises in the stands … really ?! 🤦🏾‍♂️ hope you have fun watching the rest of @EuropaLeague on TV while we are through 🙊🙈🙉 #SayNoToRacism #GoWatchBlackPanther ✌🏾

An investigation into the allegations was duly opened by UEFA, however, despite fining both Atalanta and Dortmund for fireworks and the throwing of missiles, among other things, no sanctions have been enforced relating to the alleged racist behaviour of the home fans.

After learning that UEFA have closed the racism investigation, the 24-year-old Batshauyi Tweeted a rather sarcastic response… 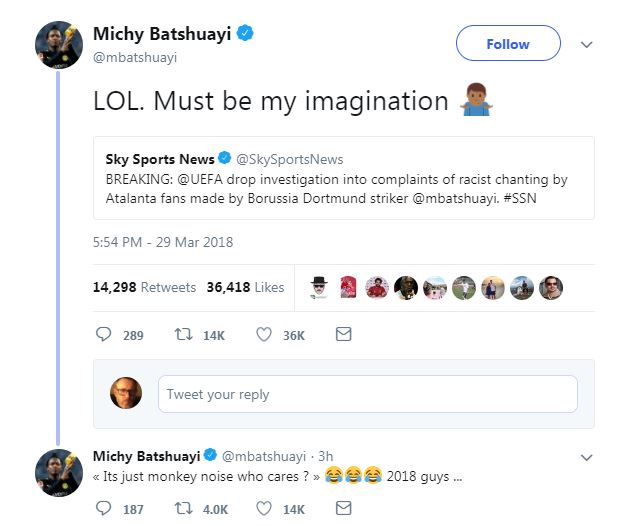 We’ve been here so many times before, yet the footballing powers-that-be still seem woefully unable (or unmoved) to properly tackle the ugly racism which still blights the game around the world.

Maybe there’s not enough money in anti-racism for them.