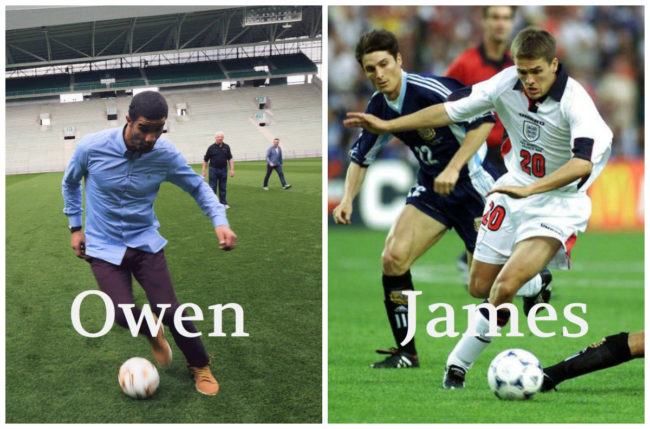 It’s Euro 96. Thoughts turn to past England trips to France, chief among them that World Cup 98 quarter-final match against Argentina. A match that ended in defeat under the tyranny of penalties, featured David Beckham’s red card for his brainless kick at the conniving Diego Simeone, two more spot kicks and a sensational goal from Michael Owen on his debut. Euro 96 sponsors Continental remembered it all. They had an idea. Could former England goalkeeper David James recreate that Owen goal?

In his dreams, yes. Easy. In reality the middle-aged, 6ft 5in (plus very tall hair) goalkeeper performing in the manner of a spry, 18-year-old, 5ft 8in Owen (hair: unchanging) – controlling the ball with his first touch before embarking on a mazy run past two super-fit international defenders before beating the goalkeeper with a sublime finish – is possible.

That is to say, it is not impossible. Just as compiling the book and accompanying DVD to Michael Owen’s Guide To Interesting Punditry is not impossible. It just requires belief that eventually magic and the unlikely can happen. James was only recently seen on TV making an American football helmet in sponge for pro-celebrity cooking show The Great British Bake Off. It flopped. But he tried.

So Continental Tyres put the challenge to James as part of their ‘Road to France’ series.

To help James channel his inner Owen (we estimate you could fit 2-3 Owens inside the former England ‘keeper), Continental brought him to the Saint Etienne’s Stade Geoffroy-Guichard stadium, scene of young Owen’s magic moment.

For purposes of authenticity, the experiment would require David Beckham to send the ball forward to Owen, two Argentine defenders and a goalie. With Beckham tied to a prior commitment at the hairdressers, and Chamot, Ayala and Carlos Roa walking their dogs, doubles were recruited.

The scene was set. Can James do an Owen. Let’s see:

Continental Tyres are giving you the chance to have your own #RoadToFrance. To find out how simply read the next page – or click here.