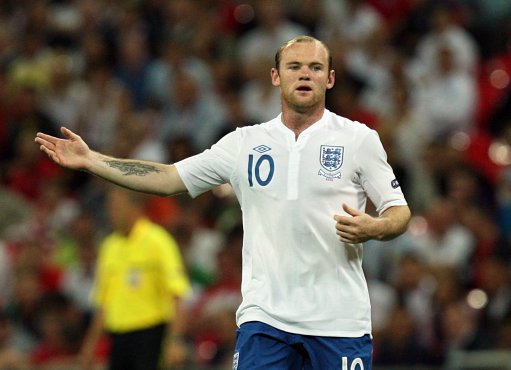 It looks like Wayne Rooney is set to start for England in tonight’s Euro 2012 qualifier against Switzerland, after the forward assured manager Fabio Capello that he has the mental strength to play despite the swirling, prostitute-based allegations in the gutter press that are enveloping his private life.

Speaking at a media conference yesterday, Capello came as close as damn-it to confirming that Rooney will feature against the Swiss;

“I spoke with him, he said he was focused and that he wanted to play against Switzerland. I am sure tomorrow he will play a really good game, the same level as he was against Bulgaria.”

When asked whether or not he intended to punish Rooney in the same manner as he did John Terry when news broke of the former captain’s infidelities before the World Cup, Capello was quick to defend his stance;

“I never suspended Terry. He played all the games [in South Africa], but he was the captain, so we changed it.”

The Italian coach also went on to confirm that Rooney will be deployed in the same deeper-lying role he adopted against Bulgaria on Friday night, admitting that trying to break down the staunch Swiss defense without his star man may have been a thankless task;

“It is good for us that he is here. For one player to stay here at this moment is really important.

Rooney will play in the same position because he really liked it. He gets the ball a lot, he can be free to move around the pitch and he can go from the back towards the goal.

It is a really important position and you can see how enthusiastic he is. After the [Bulgaria] game he was really happy.”

…till about 8 ‘o clock on Sunday morning.