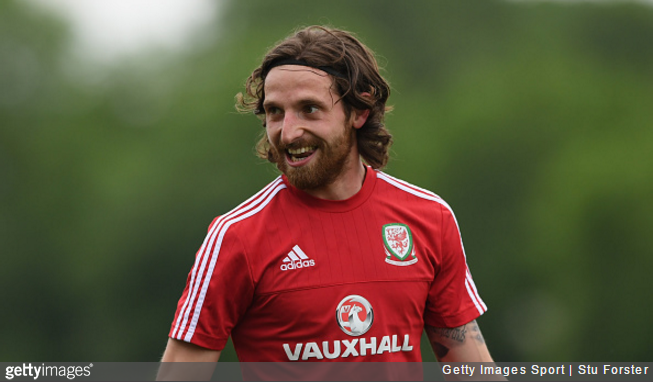 With Euro 2016 within days of farting into life, the general mood within the Wales camp (last night’s dismal outing against Sweden notwithstanding) is generally hovering somewhere around ‘bouyant’.

To capitalise on the air of bonhomie, Wales Online had team captain Ashley Williams go through the squad and give them a brief individual summation of the other 22 members.

The dressing room banter kings and the “quiet lads” were quickly identified and indexed, though Joe Allen was the man to warrant special attention from his skipper.

Indeed, Williams revealed that such is the stead in which the hirsute Liverpool midfielder is held within the Wales set-up, the rest of the team have begun holding weekly meetings to sing his praises in communion.

Everyone loves Joe. We have a WhatsApp messaging group and at least once a week we have a Joe Allen Appreciation Day.

The player-by-player profiling also served to reveal that the nicknames in the Wales camp are as pathetically shallow as you might expect from a group of professional footballers. Basically, stick a ‘Y’ or an ‘O’ on the end of it and crack on.

Thanks to Ashley-y, we learn that Wayne Hennessey is colloquially referred to as “Wayno”; James Chester is “Chezzy”, Danny Ward is “Wardy”, Neil Taylor is “Tayls”, James Collins is “Ginge”, David Cotterill is “Cotts”; Andy King is “Kingy”, Jonny Williams is “Joniesta”, Aaron Ramsey is “Rambo”, Joe Ledley is “Deadly”, David Vaughan is “Vaughany”, Gareth Bale is “Bale-o”, Sam Vokes is “Vokesy”, Simon Church is “Churchy” and Chris Gunter is simply “Gunts”.

It’s comforting to know that, as Football™ continues to bloat and mutate out of all recognition, some intrinsic facets of the game will never, EVER change.