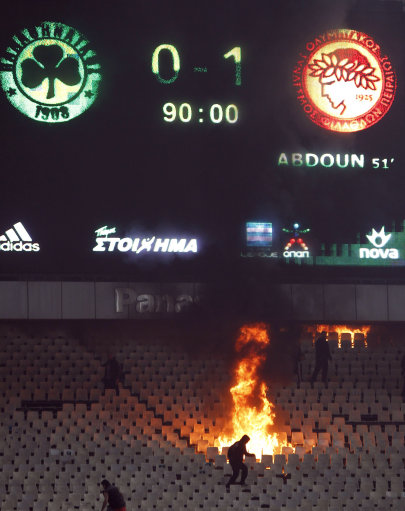 Now, we’re not exactly economic experts here on Pies but we can say with a fair bit of confidence that ‘things ain’t great’ over in Greece at the moment what with the entire country being brassic and all – and the coffers at Panathinaikos are no different.

Yesterday, the company which oversee Pana’s renting of their Olympic Stadium from the state threatened to quite literally turn out the lights if the Athens-based club don’t pay up at some point in the near future.

“Due to financial difficulties, Panathinaikos has not met the minimum financial obligations towards the stadium.

“For this reason, please consider the matches of the club to take place in the midday hours so that Panathinaikos not be charged for extra electricity, thus simultaneously increasing the amount of the arrears to the stadium.”

Panathinaikos have also announced that the club will be downsizing from the 70,000-seater Olympic Stadium which they moved to in 2008 and slouching back to their former home at the 29,000-capacity Apostolos Nikolaidis Stadium in order to reduce their monthly outgoings.