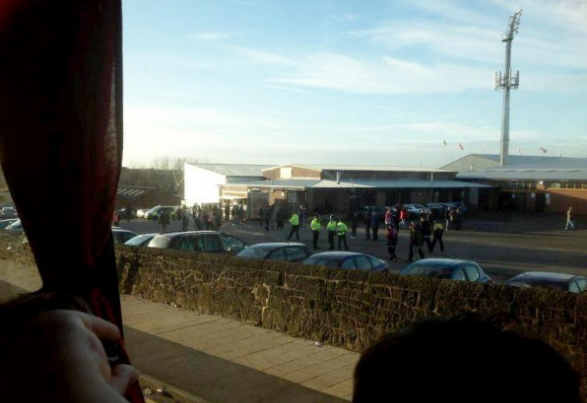 On Saturday afternoon, at roughly the same time as two coaches full of Chesterfield supporters were leaving for their away game at Port Vale, two coaches full of retired women left the carpark at their village hall in Staffordshire and set out for their Christmas carol concert at King’s Hall in Stoke-on-Trent.

Can you guess which coach-load were pulled over and given a blue-light police escort to the League Two fixture at Vale Park?

Yep. Somewhere on the A34 near Trentham Gardens – 10 miles or so from the stadium – police motorbikes pulled two coaches carrying 90 female choir singers over and proceeded to escort them through Stoke and on to Port Vale’s ground in the mistaken belief that they were rowdy Chesterfield fans.

Only when they arrived and boarded the buses did the police realise their error. Hilarity then ensued, as choir founder Liz Talbot takes up the tale:

“It was hilarious really but a little embarrassing for the police. The women all thought it was a hoot, when the police officer walked onto the coach the ladies started singing Stoke City’s anthem ‘Why Delilah’ as a bit of a joke.”

“We were heading for our rehearsal, but before we got into the city we saw two police motorbikes scream past us with their lights on and sirens going. They indicated to the driver to follow them so while one went ahead the other rider circled the coaches when he could.

“At first we thought there might have been some trouble in Stoke and maybe the police were giving us an escort to the concert hall for our safety.

“But we then realised something was amiss when the police took us past the turning for the King’s Hall and we approached Port Vale’s ground.

“The women all started talking excitedly and one said ‘I bet they think we’re football hooligans because we’re in coaches’.

“One of the police riders stopped his bike and indicated to the driver to let him on – by this time we knew they’d obviously got the wrong coaches so we started singing Delilah.

“The poor policeman stood up at the front, looked at these rows and rows of women wearing their dresses and he suddenly went white as a sheet.

“He just stood there and said ‘You’re not football fans are you’.

“He quickly apologised and got off the coach before making a few calls. We couldn’t help it, we all fell about.”

As for the actual Chesterfield fans, it would appear that they were held up back home only to eventually arrive at Vale Park nearly half-an-hour after kick-off.

Would it be churlish of us to suggest that they probably could’ve used a police escort?