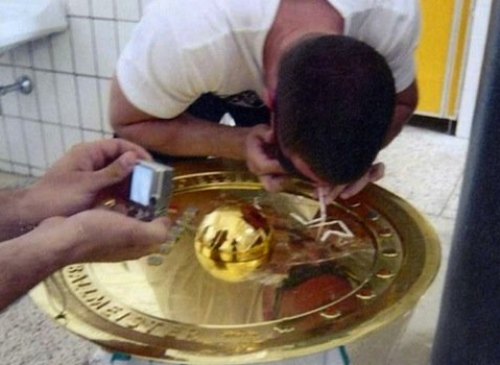 “Austrian league in scandal swamp” is the dubiously-translated headline in German newspaper Bild today with the news that an Austrian paper has published photos of a couple of Rapid Vienna hoovering up cocaine through a straw off the the club’s Bundesliga championship trophy.

The photos are alleged to have been taken within the shower rooms at Rapid’s Gerhard Happani Stadium and show a man tooting the white powder from atop the golden shield that the club received for winning the Austrian Bundesliga back in 2008 while a second friend takes a close-up shot of the action.

Rapid are yet to comment, though Bild quote an anonymous club source as saying: “”We believe that it is cocaine, and we think that it was taken in the middle of our stadium.”