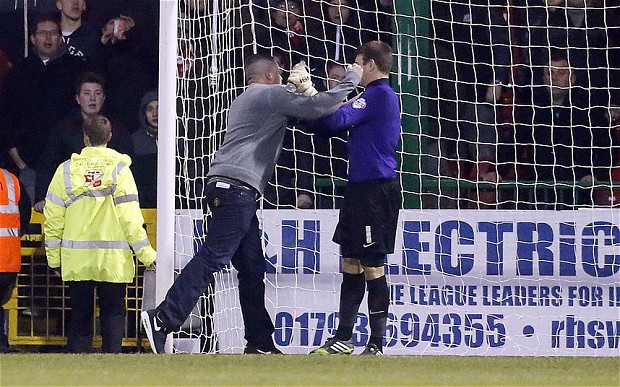 Orient won the game 3-1 to take them back to the top of League One, but manager Russell Slade admitted that the incident, which caused a long delay during the second half, completely overshadowed the result, telling BBC Radio London 94.9:

“That was the worst scene I’ve seen as a manager. It was a great win, but it was clouded by a fan running onto the pitch and throwing three punches at my goalkeeper.

“It is unbelievable. Jamie’s okay, but that doesn’t make it right. It’s outrageous. He [the supporter] needs a ban for life. He should never go to another football match.”

Thankfully, Swindon took heed of Slade’s request and duly banned the fan from the football club for the rest of his life, with Leyton Orient Chief Executive, Matt Porter, relaying the news via his Twitter account:

Swindon confirm fan who ran on pitch and attacked Jamie was arrested and will be banned for life. We will also press for strongest penalty

If you ask us, a fortnight in the stocks would be took good for that pillock.