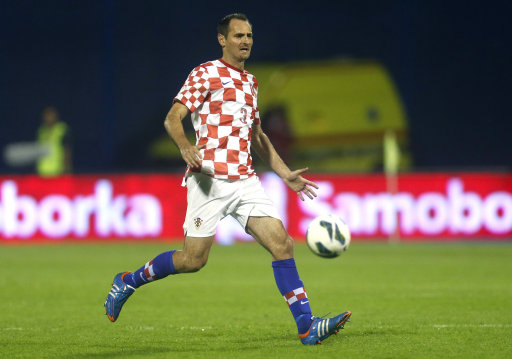 FIFA have effectively banned Croatian international Josip Simunic from playing at the World Cup after giving the veteran centre-back a 10-game ban for leading a section of fans in a chant with pro-Nazi connotations after Croatia beat Iceland in their World Cup play-off tie to reach Brazil 2014.

After the 2-0 victory in Zagreb, Simunic, 35, commandeered a microphone and led the home fans over the stadium PA system, shouting “For the homeland” to which the supporters replied “Ready!” – a chant associated with supporters of the Ustashe: the fascist regime that ruled Croatia during WWII, before being banned in 1945.

For what it’s worth, Australian-born Simunic has denied that he used the chant with any political intent, issuing a statement at the time which read:

“Even the thought that someone could put me in the context of incitement of hatred or violence is horrible.

“As a Croatian who was born and grew up outside my homeland, I associate home with love, warmth and positive struggle – everything that we showed on the pitch to win our place in the World Cup.”

However, after an investigation into the incident, FIFA have this morning announced that Simunic has been found guilty of “discriminatory behaviour” and fined to the tune of £20,000. He has also been banned from international football for 10 games – the first of which being Croatia’s opening World Cup fixture against hosts Brazil in Sao Paulo.

Simunic has also been banned from entering the confines of the stadium for all ten of the matches in question, so he won’t even be able to sit in the stands.

Aaaaaand, this is why footballers shouldn’t talk in public…ever. Good to see FIFA finally taking a firm stance on racism offences, whether unwitting or otherwise.