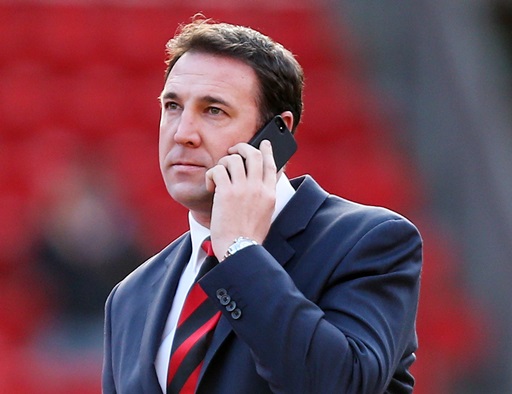 “Totally just called him a gay snake, mate! It was hi-la-rious!”

The League Managers’ Association (LMA) have released a statement this morning to publicly apologise for the general lameness of their defence of former Cardiff City boss Malkay Mackay in the wake of what Pies will now be referring to as “Gay Snake-gate” from now on.

Mackay, along with ex-Cardiff sporting director Iain Moody were found to have sent each other a series of offensive text messages on company phones, in which they used racist, sexist and homophobic slurs to describe Cardiff’s owner Vincent Tan, several players, their agents, etc, etc.

In a bid to defend their client, the LMA then wrote off Mackay’s texts as nothing more than “friendly banter” in a statement issued yesterday.

“If Malky has caused any offence by these two isolated matters he would wish to sincerely apologise,” read the LMA statement.

“These were two text messages sent in private at a time Malky felt under great pressure and when he was letting off steam to a friend during some friendly text message banter.”

This of course, didn’t go down well – with many commentators pointing out that referring to Malaysians as “f**king chinks” and making crass stereotypical comments about greedy Jews doesn’t really constitute “friendly banter” unless you happen to be MC’ing your local BNP fund-raising tombola evening.

To wit, the LMA have just released the following statement in which they apologise for the crapness of their previous statement… 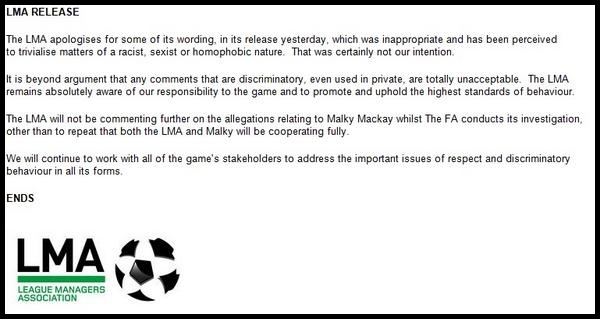 Such a professional organisation.