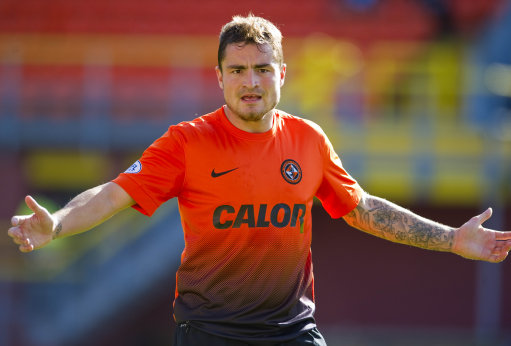 The Scottish FA have confirmed that Dundee United’s Paul Paton will be unable to appeal his two-match ban for spitting at Aberdeen’s Jonny Hayes despite both players involved openly stating that the incident never actually occurred.

The non-incident was supposed to occurred following a hefty tackle from Paton on Hayes in the latter stages of the game at Tannadice last Saturday – a challenge for which Paton was subsequently booked.

The allegations then began flying after the final whistle when footage, best described as “inconclusive”, circulated online.

Hayes then confirmed Paton had not spat at him, Tweeting:

“Just wanna clear it up that Paul Paton never spat at me, what happens and is said on the pitch is brushed aside at the end of 90 mins!

“To the Scottish FA, I’d never want to see a fellow pro being accused or found guilty of something that never happened!

“And what happened on Saturday will stay between myself and Paul, we’ve spoken on this non issue, and if asked I’ll confirm what happened.”

However, the SFA obviously didn’t deem the Aberdeen winger’s eye-witness plea sufficiently reliable and upheld the charge against Paton, eventually slapping him with a two-match ban – a decision which “mystified” the top brass at Dundee United.

“We are stunned firstly that it was brought in front of the judicial panel by the new compliance officer (Tony McGlennan) and secondly that the judicial panel have found the player guilty of something that we do not believe to have taken place,” the club said via a spokesperson.

“It is truly mystifying that three people in a room at Hampden Park in Glasgow on a Thursday afternoon can see something that was not seen by the referee, first assistant, second assistant, fourth official, SPFL delegate, the managers of either team, the players of either team including the alleged villain and victim not to mention the 11,168 supporters in the stadium.”

The Tangerines then stated their intention to overturn Paton’s ban on appeal – that was right up until the point that the SFA shut their collective butt (there’s a nice bit of imagery for you) down, confirming that Paton has “no right” to appeal as there is no option to do so in the fast-track disciplinary system they used to charge him.

Magnificent, no? Such justice. Cool. Wow.