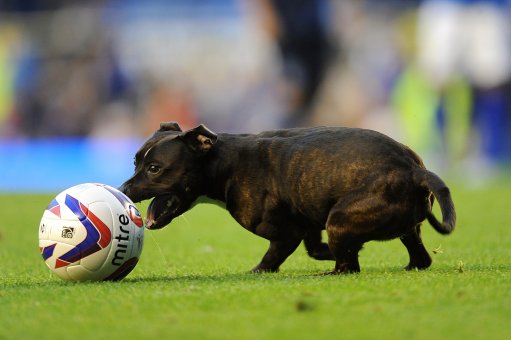 The midfielder terrier commits yet another tightly-coiled, rancid-smelling foul

In a tale as old as time itself, a footballer in the West Midlands Christian Football League was recently shown a red card for having the thorough decency to warn one of his opponents about a large, steaming dog egg that had been laid in the middle of their pitch.

The problem, you see, was his choice of wording.

Shortly after kick-off, Rowley College’s Lance Perry bellowed across the pitch to warn his St Thomas Aldridge counterparts about the pile of faeces located in their half.

However, Perry’s exact words – “IT’S DOG SH*T!” – contravened the league’s strict “foul language” regulations and therefore the referee had little option but to send the Rowley man off.

“The league does have a zero-tolerance policy to foul language and referees can sometimes interpret that rather crazily,” Rowley manager Pete Bennett told the Daily Mirror.

“We couldn’t believe it when the red card came out, and neither could Lance.”

Strangely enough, it seems that the local league authorities are on Perry’s side here, with the Birmingham County FA admitting that, while the Rowley player could perhaps have used a more demure turn of phrase, he was technically right – there was dog shit on the pitch.

As such, Perry’s red card has been overturned, with Mike Fellows of the Birmingham County FA explaining:

“Actually, sh*t is in the Oxford English Dictionary. Clearly in this case the word was not used as a term of abuse.

“Obviously if the response had followed a question about how the ref was performing, the red card would have stayed.

“We fully support the stance of the West Midlands Christian Football League in their zero tolerance to foul and abusive language.

“A considerable amount of their teams play in public parks. For users of these park and their families, it’s the last thing they would want to hear.”