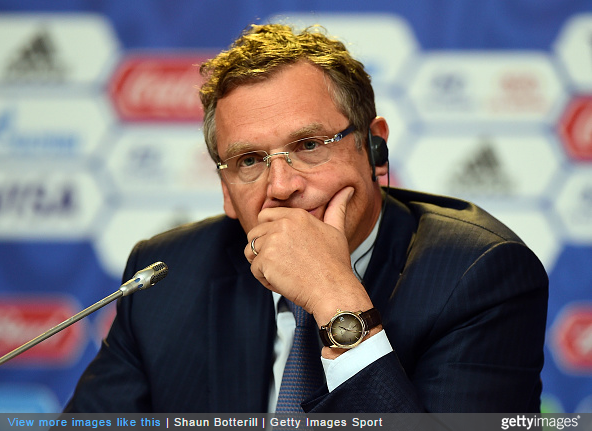 Valcke, who has served as Sepp Blatter’s right-hand man since 2007, has been implicated in a ruse to supply thousands of 2014 World Cup tickets for re-sale on the black market.

FIFA today announced that its secretary general, Jerome Valcke, has been put on leave and released from his duties effective immediately until further notice.

Further, Fifa has been made aware of a series of allegations involving the secretary general and has requested a formal investigation by the FIFA ethics committee.

The allegations were made by a consultant at a company that sought to strike a deal with FIFA to sell on World Cup tickets, but the contract was eventually cancelled.

In April 2013, a consultant for JB named Benny Alon sent a message to Valcke’s personal e-mail address in which he disclosed some tickets had been sold for up to five times the face value. But it was not until months later, in December of that year, that the contract was terminated.

Valcke strenuously denies asking for or receiving any money for the deal with JB. It is also understood he insists FIFA terminated the agreement with JB once it realised Alon was selling tickets for the World Cup above face value.

There was no explanation, however, at the delay in any action taking place.

For the record, 54-year-old Valcke, who is also implicated in an alleged £6.4million bribe paid to South Africa to nail down the 2010 World Cup, has denied any wrongdoing with his lawyer dismissing the accusations as “fabricated and outrageous”.