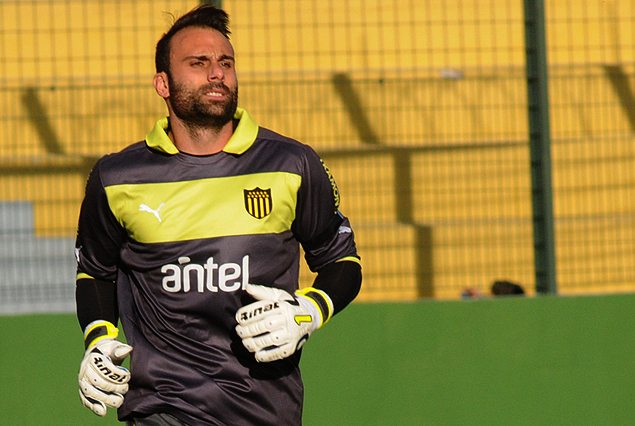 You’re never too old to be embarrassed by your mum

The man you see here is one Damian Frascarelli, otherwise known as the back-up Penarol goalkeeper who recently had to apologise to the Uruguayan club’s first-choice stopper after his dear old mother called into a radio phone-in and criticised him live on air.

Frascarelli, 30, has found playing time hard to come by since joining Penarol last year due to being stationed behind 20-year-old Gaston Guruceaga in the pecking order.

However, fed up at the junior partner hogging all the glory, Frascarelli’s mum, Maria, decided the time was right to air her grievances during a recent football phone-in on Sport 890 radio.

Using just her first name, Mrs Frascarelli called into the ‘Usted Que Opina?’ (‘What Do You Think?’) show and promptly laid into Guruceaga:

Penarol is not going to win while Guruceaga is the goalie.

According to the Mirror, when asked if she was a Penarol fan, Maria reluctantly admitted: “Yes, I’m a fan of Penarol and I’ve got a son playing in Penarol,” before attempting to continue on her anti-Guruceaga tirade.

The host then cottoned on, and interrupted her to say: “Don’t say any more. You must be Frascarelli’s mum.”

However, despite being rumbled, Maria continued to barrack her son’s competition:

Yes I am, but tell me something. Am I not right? Guruceaga is past it. He’s not up to the job any more.

He’s been a good goalkeeper and he’d still be fine in the third or fourth division but not in the first.

The radio debacle came and went, but it was Frascarelli himself who was left to clean up the mess, later issuing a public apology to Guruceaga on his mum’s behalf.

Translation: “I write this message to apologise for what happened. This is an apology to Gaston. She’s my mother, but I can’t look after what she says.”

“I have already spoken with Gaston and he and everyone knows what our relationship is like. It’s not going to affect our friendship!”