IN a revealing interview with the Guardian, ref Howard Webb admitted that he should have sent off Nigel De Jong for a reckless high tackle on Xabi Alonso in the 2010 World Cup final.

“Having seen it again from my armchair, I would red-card him,” Webb admitted, which I think is very big of him.

“The trouble in the actual game was that I had a poor view of that particular incident. I was looking through the back of Alonso and though I could see the foot was high, I could not be certain of the extent of the contact.

“It wasn’t that I didn’t want to send anyone off because it was a World Cup final, though I was mindful of the fact that the game was the pinnacle of the players’ careers as well as of mine. I just wasn’t prepared to take a guess 25 minutes into the game.” 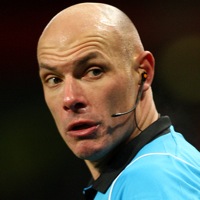 Fair comment by Webb? He was subjected to a lot of flak (too much, in my view) over his card-happy display in the final, but I think the players – especially the cynical Dutch – made it an extremely difficult game to ref.