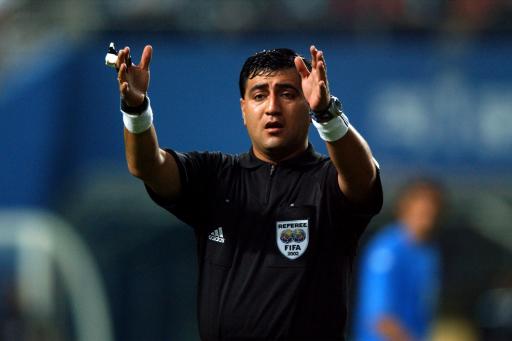 A former World Cup referee has been arrested at New York’s Kennedy Airport after customs staff found ten bags of heroin taped to his stomach, back and legs.

U.S. Immigration and Customs Enforcement agents collared Byron Moreno late on Monday evening after he arrived in America on a commercial flight from his native Ecuador.

Moreno is the official that took charge of Italy’s contraversial 2002 World Cup second-round defeat at the hands of South Korea, and is still reviled in Italy as the man responsible for the Azzurri‘s untimely exit from the competition.

The Ecuadorian disallowed a goal, awarded tournament co-hosts South Korea a debatable early penalty and sent off Franceso Totti for diving leading many of the Italian camp complaining of a conspiracy to have them knocked out.

Upon hearing the news that Moreno had been arrested, ‘keeper Gianluigi Buffon (who saved the aforementioned penalty) commented;